Gladys Reyes in no hurry to have second baby 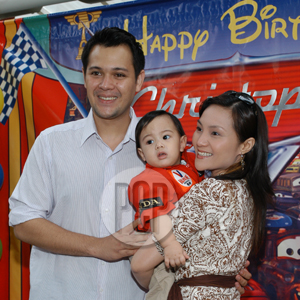 Gladys Reyes says she and her husband, Christopher Roxas, are not in a hurry to have their second baby. Right now, the couple are enjoying their married life and taking care of their first-born child, Gian-Christophe, who just turned one year old last January 23.

In 2004, Gladys had a blighted ovum that caused her to lose her first baby. Looking back now, she and her husband can only be thankful that their loss was replaced by Gian-Christophe who, at age one, is already showing the traits of both his parents.

The little boy is also showing signs that the showbiz gene is in him. Gladys has already noticed little Christophe's love for music and dance.

Prior to tying the knot, Gladys and Christopher had an 11-year relationship, which the couple now credit for their strong marriage. Incidentally, they also celebrated their third wedding anniversary on January 23. "Iba pa din 'yong long engagement. You get to know each other better, parang makikilatis mo nang husto kung gusto mo nang makasama 'yung tao nang habang buhay."

Right now, they are not only busy with show business but have become entrepreneurs as well. The couple has put up a store for their whitening and beauty products in Metropolis, Alabang, which Christopher manages.

The couple can only wish the best for their first-born son. Gladys says she would like to see him grow to be "God-fearing, mabait at mag-aral nang mabuti."

Gladys is currently part of GMA-7's teleserye Bakekang and appears on the comedy show Bahay Mo Ba ‘To.