Iza Calzado to star in her first indie film 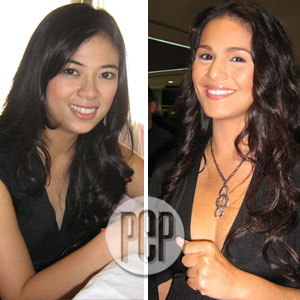 Iza Calzado (right) and Liza Diño star in Mona, an independent film about prostitutes in Singapore. "It's like an escort service na we're paid in dollars. We're paid by the hour. It's a very interesting story... It was submitted for the Singapore International Film Festival but very Pinoy ‘yong treatment. I think our local audience will love it also," says Liza.

After the success of Shake, Rattle, and Roll 8, Iza Calzado breaks away from mainstream movies with Mona, her first ever indie film.

Iza's co-star, Liza Diño, tells PEP (Philippine Entertainment Portal) about the film: "Mona is Iza. I play Gab, her best friend... It's a true story. It's about escorts in Singapore.

"Singapore escort [‘yong role ko] na pumupunta ako sa Pilipinas once in a while. Nakilala ko si Iza. May anak na si Iza. May sakit ‘yong tatay niya... I was the one who recruited Iza to be an escort, but kami we're a different level. Pang-expatriates kami."

"Choosing to be a prostitute is not a sin [there]. It's not a crime [there]... It's not something na kailangang ma-degrade ‘yong mga babae dahil nag-choose sila to be a prostitute. Sometimes it's a choice. Pinili ko ‘to e, and iyon ‘yong story—paano siya naging prostitute at paano niya tinanggap sa sarili niya na prostitute siya at ginagawa lang talaga niya 'to. Hindi lang lagi siyang api. Hindi siya ‘yong prostitute na pinahihirapan. Minsan kahit na prostitute ka you know sometimes you fall in love also with your costumers. May mga ganoong factors."

Liza has starred in several indie films like Compound and Rome and Juliet. She will star in Sinungaling na Buwan, an Ed Lejano film that is part of the 2007 Cinemalaya finalists. She has only good words for Iza, who is an indie scene freshman.

She remarks, "She's the most down-to-earth person I've ever met. I mean with her stature and the way she treats people talaga sa set, napakasarap makasama. Sarap katrabaho, magaan and giving actress. I think Iza's one of the nakikita kong malalim. Pinag-aaralan niya ‘yong role niya. I never felt awkward during the entire shoot kasi most of the shoot, magkasama kami and very at ease kasama. Mabait siya.

"Aside from Iza, halos lahat theater actors—Jake Macapagal, who also part of Compound; Miguel Fausman, one of the theater actors we have here in the country... The director is Joey Murel. It's under Bandit and Outline productions. I think it's Pete Daza's, the son of Julie Yap Daza, first pick on producing films."

Mona is going to be shown in different countries.

Liza says, "It's coming out this March. It's gonna be released locally and then festivals. It was submitted for the Singapore International Film Festival but very Pinoy ‘yong treatment. I think our local audience will love it also."
Read Next
Read More Stories About
Iza Calzado, Liza Dino
Post a Comment
Featured
Latest Stories
Trending in Summit Media Network