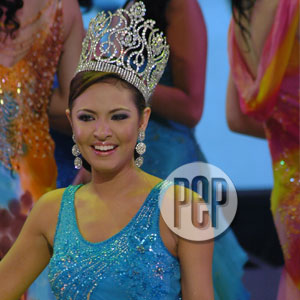 Young actress Margaret Wilson fulfills her dream of becoming a beauty queen as she was crowned Bb. Pilipinas-World.

The three Bb. Pilipinas titleholders will represent the Philippines in the biggest beauty pageants in the world: Miss Universe, Miss World, and Miss Universe.

Named 1st runner-up was Leizel Verses who also won Best in Long Gown. On the other hand, Abigail Lesley Cruz was adjudged 2nd runner-up and Best in Swimsuit.

Margaret is a contract artist of GMA-7. Before joining the Binibining Pilipinas, she was part of the action-adventure series Asian Treasures topbilled by Angel Locsin and Robin Padilla, who incidentally was one of the judges in the coronation night.

Another GMA-7 artist and StarStruck 2 Avenger, Ailyn Luna, failed to make it in the Top 13 finalists.