Ruffa and Gretchen on doing the movie "Desperadas" 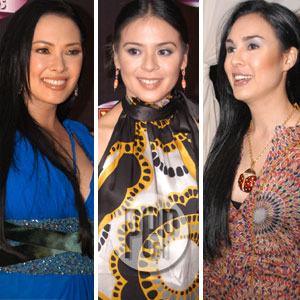 Talk has it that the movie, only on its pre-production stage then, didn't push through because of the Gretchen-Dawn spat that ensued after the two worked together in Preview magazine's cover shoot and in a shampoo commercial.

Dawn was allegedly irked by Gretchen's prima donna ways. The latter was said to have brought too many designer things, too many bodyguards and yayas, and the controversial microwave. Gretchen defended herself by saying that she wasn't trying to show off and that she brought everything she needed so that she won't bother anyone with her needs.

The two tried to patch things up quietly, but still, word got out. Gretchen suspected Dawn of leaking it to the media.

Both was said to have quit the Regal Films project.

The Philippines' Next Top Model host is a friend to both parties and has remained neutral.

She adds, "You know, I wanna be professional and always get along with my co-workers, so kahit sino ilagay ni Mother doon, okay lang sa akin."

Now that the movie might push through, who does she think is suitable to complete the cast?

In an interview with The Buzz yesterday—March 11, 2007—where Ruffa temporarily replaced Kris Aquino as co-host, Gretchen was asked if she's willing to give the movie another try.

If Dawn were to be replaced, Gretchen said that her friends Rufa Mae Quinto or Joyce Jimenez could fill in.
Read Next
Read More Stories About
Gretchen Barretto, Dawn Zulueta, Ruffa Gutierrez
Celebrity Updates