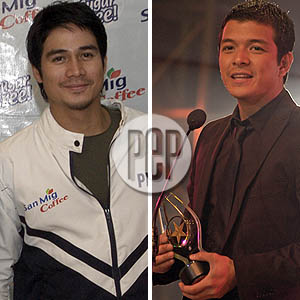 "This night, this is God's work for me," declares Jericho Rosales (right), after being named Movie Actor of the Year for his performance in Pacquiao The Movie. Piolo Pascual bagged the same award for the movie Don't Give Up On Us.

An emotional Jericho Rosales addressed the crowd that attended the 23rd Star Awards for Movies that took place last night, March 23, at the University of the Philippines Theater in Diliman, Quezon City.

Both Echo (Jericho's nickname) and Piolo Pascual were named Movie Actor of the Year by the Philippine Movie Press Club (PMPC). The frontman of the band Jeans won for his role as Manny Pacquiao in the bio-pic Pacquiao The Movie, while the heartthrob Piolo won the accolade for Star Cinema's Don't Give Up On Us.

The star-studded event, which had the theme "A Night of Winners, A Night of Champions, A Night of Triumph," was hosted by Dingdong Dantes, Iza Calzado, Heart Evangelista, and Echo. Ryan Agoncillo served as the trivia host and had pre-taped his segment called "Best Global Movie Triumphs."

Judy Ann Santos of Kasal, Kasali, Kasalo (KKK) was named the Movie Actress of the Year, making it one of the five awards bagged by KKK that night. Juday failed to attend the awards night however.

KKK was also chosen as Movie of the Year and had the Most Original Screenplay of the Year. Gina Pareño was named as Movie Supporting Actress of the Year for her role as Juday's mother in the romantic comedy. Movie Director of the Year Jose Javier Reyes of KKK bested Joyce Bernal (Don't Give Up On Us), Joel Lamangan (Pacquiao The Movie), Brillante Mendoza (Kaleldo), Cathy Molina-Garcia (You Are The One), and Cesar Montano (Ligalig) for the said category.

Here is the complete list of winners during the 23rd Star Awards for Movies:

"Sana Ay Malaman Mo" (Theme song from the movie Don't Give Up On Us from Star Cinema. Composed by Ogie Alcasid and Louie Ocampo/Interpreted by Piolo Pascual)

Darling of the Press
Ogie Alcasid