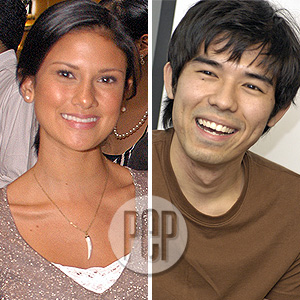 In the article posted in PEP (Philippine Entertainment Portal) yesterday, April 18 , young actress Bianca King—or Bianca Charlotte King in real life—confirmed her "kissing photo" with Antoinette Taus in Boracay, which circulated right after the Holy Week on the Internet.

"I'm not gonna deny...That's me and Toni doing it," Bianca said in her live interview with Paolo Bediones on S-Files. "Toni and I, we're very close, we're like sisters. Ang close ko talaga sa kanya."

She further explained, "It's just normal. Yun nga lang, nagmukha lang akong masyadong passionate yata kasi napahawak ako sa face niya. It was a sisterly kiss, non-malicious, unlustful, smack kiss. There was simply no malice. We were aware that it was happening."

The PEP source adds, "She is very malambing. She does that to her guy friends, girl friends... She's like the baby in the family, e."

At the time Bianca was vacationing in Boracay, Champ was also spotted strolling along the white sand beach.

Champ, or Arthur Bernard Dolino Lui Pio in real-life, is a songwriter and vocalist for the band Hale. He earned his Human Resource Management degree from De La Salle University-College of St. Benilde. He is the son of multi-awarded composer Nonoy Tan.

On the other hand, Bianca was a sophomore taking up Mass Communication in University of Asia and the Pacific when she decided to stop and focus on her showbiz commitments. She had her biggest break in showbiz when she played Aviona in Mulawin.