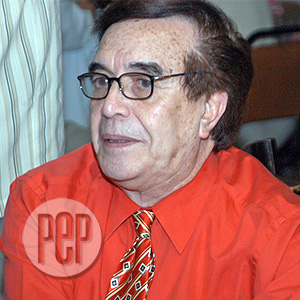 Being one of the pioneers of GMA-7, German "Kuya Germs" Moreno was slightly hurt when his face was not shown on the first part of the new station ID of Kapuso Network.

The Master Showman German Moreno allegedly felt sligyhted when he was not included on the new station ID of GMA-7. According to reports, Kuya Germs showed up for the shoot, but was surprised when he did not see his face when it was aired. Considering that the star builder/TV host/comedian/radio announcer is one of the pioneers of GMA-7, he was not allegedly given priority on the said station ID.

The issue was clarified by the Kapuso Network, stating that the new station ID has three parts and Kuya Germs will definitely appear on one of those.

Last April 17, Tuesday, PEP (Philippine Entertainment Portal) had the chance to speak to Kuya Germs on the phone to get his reaction.

True enough, in the latest edition of the new station ID of GMA-7, Kuya Germs is already visible.

Another issue that also surfaced recently was Kuya Germ's "tampo" with actress and Batangas gubernatorial candidate Vilma Santos. According to reports, the Star for All Season snubbed Kuya Germs's invitations to grace his Walk of Fame event held in Eastwood, Libis, where a star bearing Ate Vi's name was already engraved, and the opening of Paradise of Stars at the Mowelfund compound.

But in Kuya Germs's explanation, it was the fans of Ate Vi who were complaining why their idol did not appear on the said events.