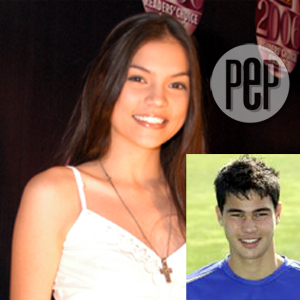 Philip James Younghusband, the 19-year-old Filipino-British professional soccer player who got the chance to play with David Beckham, fell in love at first sight when he saw pictures and videos of local star Rhian Ramos, 17, on the Internet.

"A friend of Rhian told me about her and sent me some pictures...and she's very, very pretty, so I'm looking forward to meeting her," said Philip in an interview with Showbiz Central.

Philip tried contacting Rhian and soon enough, they became friends. This friendship also led to Philip visiting the Philippines again just to see her. Excitement and anxiety was written on Phil's face as he arrived at Broadway Centrum to meet his crush and give her flowers.

Showbiz Central was there to document this tender moment.

After the initial getting-to-know you, Philip introduced his Filipino mom Susan to Rhian.

What does Rhian feel about Philip traveling all the way just to see her in person?

"First impression is that she's very pretty... obviously," Phil shyly says. "She's very nice and very funny which is exactly what I've heard about her and that I would like to get to know her better."

According to his profile in wikipedia, Philip was born in Ashford, Middlesex, England, the son of Philip Younghusband, a chartered accountant, and Susan Younghusband, a Filipina.

He was the youth team's top scorer in the 2003/2004 season and made his first reserve start in November 2004. In the 2005/2006 season, Phil made 21 appearances for the Chelsea reserve team, including 18 starts, and scored five goals. He also made one appearance as a substitute for the Chelsea youth team.

Rhian, on the other hand, is one of the most promising young actresses today. She started her showbiz career as Richard Gutierrez's leading lady in Captain Barbell and they are paired together again in Lupin. Rhian made her film debut in The Promise, starring Richard with Angel Locsin. Her follow-up movie is the horror film Ouija, starring Judy Ann Santos, Jolina Magdangal, and Iza Calzado.