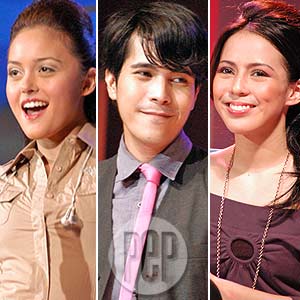 Three new VJs have been added in the elite circle of MTV Pilipinas VJs after winning the MTV VJ Hunt Finals Night in SM Mall of Asia last June 22.

Every two years since 1997, MTV Philippines has searched the country for dynamic and unique personalities that dare to go through the MTV VJ Hunt. This year's audition started last April, where hundreds of aspirants lined up to earn a spot as finalist in the 2007 MTV VJ Hunt. But only 12 were given a chance to prove themselves to be the next MTV VJ.

During the program, the three winners and the rest of the 12 finalists—Brent Javier, Reuben Uy, Sheena Vera Cruz, Regie Jukes, Jr., Eri Neeman, Lucia Fischer, Marco Borromeo, Nina Dolino, and Roxanne Barcelo—were given the final tests before the final decision.

The finalists were asked to do live interviews with celebrity guests like Kitchie Nadal, Francis Magalona, Kris Lawrence, Lovi Poe, and Chris Cayzer. There were also live performances from Sino Sikat?, All Star, Ill-J, and Danita.

Then, from 12 finalists, they were cut down to half—leaving Andi, Sib, Kat, Roxanne, Brent, and Eri in the magic six. The final six were given two more challenges: to give an introduction for the music videos they had randomly picked and to answer weird questions posed by the interviewer, comedian Tado.

After the officials tallied the scores, the final six got more nervous as VJ Sarah Meier revealed that there are three winners, instead of two, because two challengers tied for the top spot.

When she called Andi and Sib for the first two spots, the remaining challengers as well as the audience, became more anxious. But Sarah did not announce the name immediately; instead she gave Kat a big hug before she proclaimed her as the winner.

WINNERS' REACTIONS. Andi, or Andi9, is not new to the job, being already known as one of the deejays in the radio program of Mo Twister, Good Times. The program recently courted controversy with the segment "Forbidden Questions."

Andi admitted that her co-deejays, Mojo Jojo and Mo Twister, have helped her in boosting her confidence for the competition. "Mojo and Mo were really good mentors to me. I wouldn't have done it without them. I mean, they molded me also, like the confidence pinasa nila sa akin, so being a DJ has really helped me."

Sib Sibulo, a band member, doesn't see any conflict between his new job and his role in his band. "MTV is a job and my band is my band right now. I don't think it matters. Think of it as an old guy who plays golf and goes to the office. Some people go to play golf on weekends, while I have my rock band."

And what do these new VJs look forward to after winning the competition?

For Sib, "MTV is a huge channel and it's great to part of its franchise and I'm actually gonna get to meet a lot of more music celebrities. And, you know, I think this one fits me very, very well. I haven't even started and I love this job already."