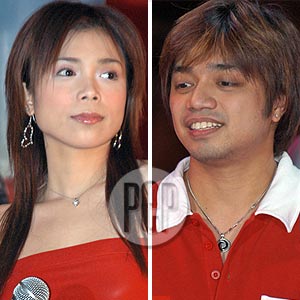 Singers Nyoy Volante and Nina both insisted that their decision to part ways was mutual and there's no resentment between them.

"It was a mutual decision," Nina affirmed in a separate interview with Showbiz Central last Sunday, June 24.

The exact period of their split remains sketchy, as there have been rumors that the two had already broken up a few months back despite still doing shows together.

As expected, the issue of a third party surfaced and talks gained weight due to Nyoy's refusal to give direct comments every time he was asked.

"We'd rather keep the details of our break-up private. We remain friends," he simply said.

Nina, on the other hand, quickly diffused the third-party angle.

But despite their shared "mutual decision" declaration, insiders were intrigued when the former lovers coldly ignored each other backstage after a singing engagement.

According to Nyoy, there's no reason for both of them to ignore each other since they're on good terms despite everything that happened.

The singer-songwriter, who is known more as an acoustic artist, clearly showed disgust with the talks that their break-up was part of a publicity gimmick to put more drama on Nina's latest hit single, Someday, which is about bitter defiance and hope in the face of unrequited love.

Someday was written by Nyoy and was interpreted by Nina and included in her new album.