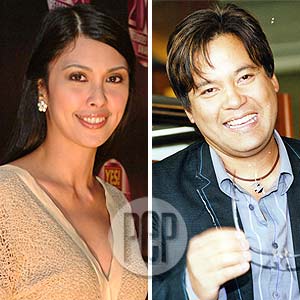 All's well between estranged couple Martin Nievera and Pops Fernandez as they reportedly agreed to do a concert together.


Beleagured Concert King Martin Nievera will be reunited with estranged wife Pops Fernandez—on stage, that is.

Details about the show are still scarce but Pops confirmed the good news to TV host German Moreno who wrote about it in his column in Pilipino Star Ngayon today, July 4.

She never mentioned it directly, but many say that Pops' decision to stage a concert with the father of her two sons is to help Martin regain his ground after the producer of his well-publicized US shows pulled out without proper notice.

Pops just came back fresh from the success of her US Las Vegas show with fellow diva Kuh Ledesma. Pops never had the chance though to meet Martin and his infant son, Santino, with partner Katrina Ojeda.

"Kuh and I had a hectic schedule and during our free time, all we did was sleep and sleep," Pops told Philippine STAR's Ricky Lo.

Incidentally, Pops and Martin's son Ram visited his father in Las Vegas for a short vacation, and to have bonding time with his half-brother.

Ricky Lo wrote that despite all his personal and business problems, Martin dutifully made sure to fulfill his fatherly duties by spending quality time with his kids.

"Ram was so happy to have finally met his baby brother. Ram enjoyed his new role as a kuya. Last week, I took them both to Disneyland. It was beyond magical. Santino loved Mickey Mouse but only second to his kuya Ram," Martin proudly shared with Ricky Lo through text message.

Pops hoped to meet Santino soon after Martin announced that he will be home this coming August to attend to some personal matters, which he refused to divulge.

"It's all up to Martin. If ever, it will be the first time I and Robin will see Santino," enthuses Pops about the possibility of spending some time with Martin and his new family.

Interestingly, Pops also revealed that she saves a picture of Santino, which was sent by Martin, in her mobile phone.

"Many people may not believe that I actually keep Santino's photo in my cell phone," concluded Pops.