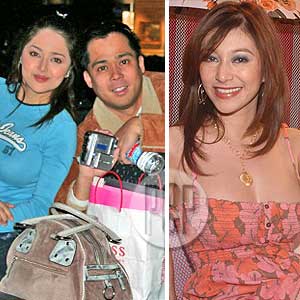 "Alam mo, and alam na rin ng tao na kung ano 'yung reason kung bakit ko pinili si Jessa...and it has nothing to do with you. Jessa came [at] the right time," says Dingdong Avanzado when Rufa Mae Quinto asked why he chose Jessa Zaragoza over her seven years ago.


After almost a year in the United States, celebrity couple Dingdong Avanzado and Jessa Zaragoza arrived in the Philippines with their daughter Jayda. Both Dingdong and Jessa are now US immigrants and they'll be staying here only for a short while before doing a series of concerts in Australia.

Little did they know that no rain can cool the hot seat of Showbiz Central as they faced the woman who cried, according to reports, when she found out that Dingdong and Jessa were about to get married—Rufa Mae Quinto. Rufa Mae was Dingdong's exclusive date and she was a close friend of Jessa. Things got sour as the two friends fought over Dingdong.

Have the wounds healed after almost seven years? Is the Jessa-Rufa Mae-Dingdong love triangle a thing of the past?

Rufa Mae welcomed the couple a bit nervously; she looked awkward, as if she were the one on the hot seat. After exchanging nervous pleasantries with the couple, Ruffa went straight to the point with her first question: "Anyway, since nandito na rin tayo, ano ba ang gusto ninyong sabihin sa akin?"

Rufa Mae was just joking. She was quick to change the humor in the air and asked about the how the couple was.

"Ilang years na ba kayo?" Rufa Mae continued to ask. Laughter erupted between the three of them as Rufa Mae explained that it's been a long time and whatever happened in the past is over. Then she quipped, "Sa akin wala na ‘yon, sa inyo meron pa ba?"

Rufa Mae then admitted that it's been seven years and she found it shocking to find herself sitting and talking with the Avanzados on live TV.

Dingdong couldn't agree more. He said, "Correct, actually, alam mo na in a way, blessing siya and naniniwala ako na everything has its season and everything has its time. So, I think this is the time na magkaharap-harap tayo and magkaalaman na kung ano..." then Dingdong broke off in mid-sentence and started laughing.

"Siyempre, before, it was all left hanging," Dingdong answered. "You know, nag-asawa na ako and hindi na tayo [pertaining to Rufa Mae] nakapag-usap. Binigyan tayo ng landas, like kami [ni Jessa], iba ‘yung path na we took, and sa iyo, iba din. Of course we're happy for you and you have grown."

Dingdong took a long time before answering, and when he finally recovered, he said: "Alam mo, and alam na rin ng tao na kung ano yung reason kung bakit ko pinili si Jessa...and it has nothing to do with you. Jessa came [at] the right time."