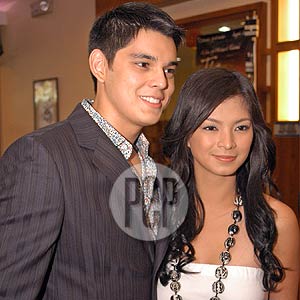 The handsome actor said there was a tinge of sadness in Angel's voice as they talked. Although Angel attributed her loneliness mainly to living alone far away, Richard sensed that part of his former screen partner's melancholy was because of the issues she is facing here at home.

Angel Locsin, currently in London for a crash course in fashion design, has been the center of ugly controversies stemming from her decision to transfer to GMA-7's rival network ABS-CBN. The move left GMA executives aggrieved by being the last to know, as they claimed. Even as more intrigues and issues cropped up, little was heard, if at all, from Angel.

Richard said that he was initially shocked when he heard the news confirming Angel's transfer and was saddened not just for himself but for the entire GMA organization.

NO FINAL ADIOS. Before Angel left for abroad, it was reported that she visited Richard on the set of Lupin. Looking back, Richard said that Angel never gave out any hint that the visit might be Angel's way of bidding goodbye to her screen partner and good friend.

Despite everything that's been said, Richard refuses to side with anyone, especially while Angel is defenseless against all the allegations thrown at her.

Network differences aside, Richard remains optimistic: "Pero it's possible that Angel and I will be working again. I'm sure there's a possibility na magkakatrabaho kami ulit."