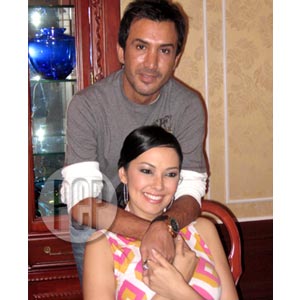 "I have hope, if God wills, this [relationship] will be forever," says Yilmaz Bektas about his relationship with estranged wife Ruffa Gutierrez.

Yilmaz Bektas concludes his seven-day visit to Manila today. If the weather permits it, he will be onboard a 2 p.m. flight bound for Dubai, UAE, where he will transfer to a connecting flight to Istanbul, Turkey.

In a three-hour interview with YES! magazine and PEP (Philippine Entertainment Portal) last night, August 16, at the presidential suite of Shangri-La Makati—where the Turkish businessman has been staying since he arrived—Yilmaz said he is currently in a step-by-step process of patching things up with his wife Ruffa Gutierrez and her family.

It has been six months since the couple last saw each other. They have been separated for the past few months because of their marital problems. The couple has both come out in public to air their side of the story.

After everything that has been said and done, last Friday, August 10, Yilmaz finally came to the country to make amends with his wife, Ruffa, and to see their two daughters, Lorin and Venice.

Today, he will leave the country, but he will leave with "hope" that he and Ruffa will completely fix their marital issues and that his family will be complete again.

"I have hope, if God wills, this [relationship] will be forever," said Yilmaz.

Yilmaz doesn't know when he will be back to visit his family, but he says that he will definitely come back for them.

"I'm not gonna wait [a] long time. I will not make the same mistake again," he promised.

Before leaving, PEP found out that Yilmaz ordered one thousand and one white flowers to be delivered to his in-laws, Annabelle Rama and Eddie Gutierrez. The gesture of sending 1001 roses, according to flower lovers, signifies "faithful love that will on forever."

During his one-week stay here in the Philippines, Yilmaz was not able to talk or see the parents of Ruffa. The flowers symbolize Yilmaz's first move to make peace with Ruffa's parents, especially Annabelle.