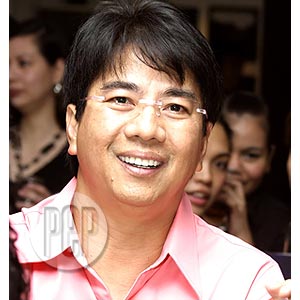 Wowowee host Willie Revillame can heave a sigh of relief as far as the February 4, 2006 Ultra stampede is concerned.

Justice Secretary Raul Gonzales, in a resolution submitted last August 22, cleared Willie against the complaint of reckless imprudence resulting in multiple homicide and physical injuries in the aftermath of the stampede that killed 71 people, mostly women. The tragedy occurred on the first anniversary of Wowowee and the celebration was supposed to be at the PhilSports Arena (formerly ULTRA) in Pasig City.

The complaint against Willie suggested that he was responsible for the stampede. But according to Justice Scretary Gonzales, Willie's invitation for the public to participate in the celebration did not serve as the catalyst of the unfortunate incident.

"The invitation was not, so to speak, the spark that eventually led to the explosion... More importantly, not by any stretch of the imagination can the act of Revillame, by itself, naturally and adequately lead to the stampede that killed 71 people and injured hundreds more," said Gonzales.

The Justice Secretary also added in his statement that Willie's invitation was a pre-taped one which was aired before the show. Thus, the host was oblivious of the huge turnout and by no means should be held liable for any recklessness.

An estimated crowd of 30,000 people lined up at the PhilSports Arena, a massive number compared to the 17,000 attendance that was allegedly called by the Wowowee staff. The crowd's restlessness prompted the venue guards to shut down the gates, triggering the mob to push forward. Many were trampled to death while others sustained injuries.

In October 2006 Willie filed an independent petition, aside from that of his other co-respondents (the show's staff, including several ABS-CBN top executives).

In a statement given out by Willie's lawyer to the Philippine Daily Inquirer, the host expressed gratitude to all those who "supported him throughout this whole ordeal."

Resolution of the case filed against Wowowee staff and ABS-CBN executives is still pending.