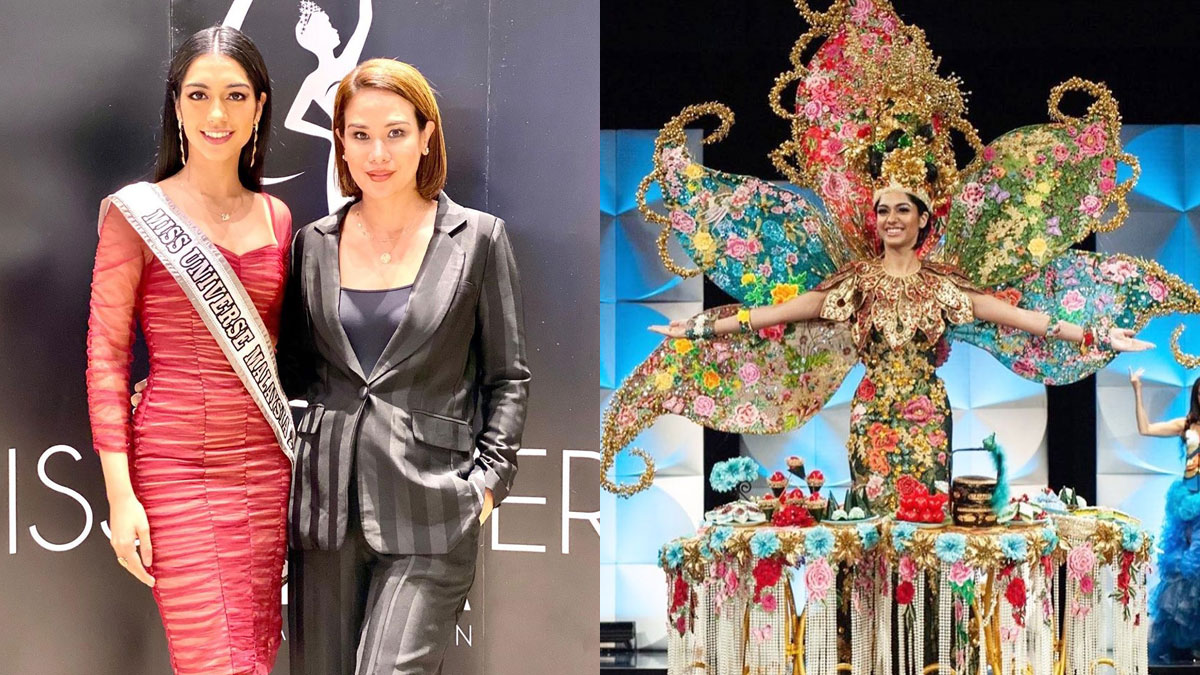 Sabi niya, “Here’s a look at the winner, Philippines.”

“OH MY GOD! For the first time in history, we WON Best National Costume! So happy for MALAYSIA!

"Well done @shweta_sekhon_ for carrying the ‘Peranakan Indulgence’ so well. Thank you @carvenong_couture for putting us on the world map!
I’m in tears!!!! Tears of pure joy!

“It’s ok @iamsteveharveytv we forgive you for the boo boo. We know it was the teleprompter.”

Ang sabi ni Elaine (published as is), “I am extremely disappointed at how the Best National Costume announcement at Miss Universe has come to this.

“A few hours ago, during the live telecast just after the opening round, Shweta was asked to go backstage to change into her National Costume for it to be showcased as Best National Costume, and that’s what she did, and conducted interviews as well.

“When she came out, the host Steve Harvey announced Philippines as the winner and even when he approached to talk to Shweta, he still assumed he was talking to Philippines she of course corrected him and said it was Malaysia and not Philippines.

“And she continued to explain her costume.”

Dagdag pa niya, “Malaysia, who has never been placed at Miss Universe nor won anything, rejoiced!

“4 hours later, we found out via Twitter that Miss Philippines was the actual winner.

“I have taken sometime to reply anyone because I was waiting for an explanation from the Miss Universe Organisation.”

Sabi niya, “So I emailed Paula—the President and asked her to please clarify, Paula replied me and said that Philippines won the online voting, but the producing staff backstage picked their favorite and wanted to showcase her.

“However this was not explained on the show. To everyone who watched it, it was like as if Malaysia had won. Because why would you put a delegate in her costume, have her do interviews and then tell her that she actually didn’t win but was just the producing staff’s choice .

“I’m speechless but it is what it is.

“To all of you who have congratulated and made us feel special, I thank you.

“Shweta and her national costume will always be a winner to us.

“I mean, we did get all eyes on Malaysia and we got to show off our culture and heritage right?”

Ilang oras ang nakalipas, naglabas ang MUO ng statement: “Mr. Harvey made a joke out of it, but no mistakes regarding the national costume winner were made by him, the prompter, or production.

“Miss Sekhon wasn’t aware we’d be announcing Philippines first, so she jumped the gun when Mr. Harvey started with that news.”

Ang post niya sa Instagram, “No words can ever describe how grateful am I to the Lord for this crazy journey of mine at @missuniverse I came across many new faces, made tons of friends , gained many sisters , got so many mothers and most importantly IT WAS CHRISTMAS SEASON YESTERDAY DURING BREAKFAST WHEN I RECEIVED GIFTS FROM ALL AROUND THE WORLD !

“Many has been asking me questions and clarification about the National Costume . Well 4 countries were briefed to be on standby as we were Top 4 for National Costume and Philippines was part of it too .

“We were told that a picture would be displayed if we made it to top 20 and if we don’t , we would have to put it on . The entire day the crew went on finding my costume as I was told to be the WINNER .

“I am totally fine with it because in my eyes , every girl that came to compete is a winner !

“Philippines or Malaysia, there isn’t any difference because we are O N E !

“Congratulations @zozitunzi for the title too ! Truly deserving indeed and I can’t wait to see your journey !!!

“Congratulations to the very beautiful @gazinii too ! Love you so much babe.

“And to my fellow Malaysians , I can’t wait to be back and get to work ! Trust me , this is just the beginning !

“I can’t wait to make you all proud ! I AM UNSTOPPABLE.”