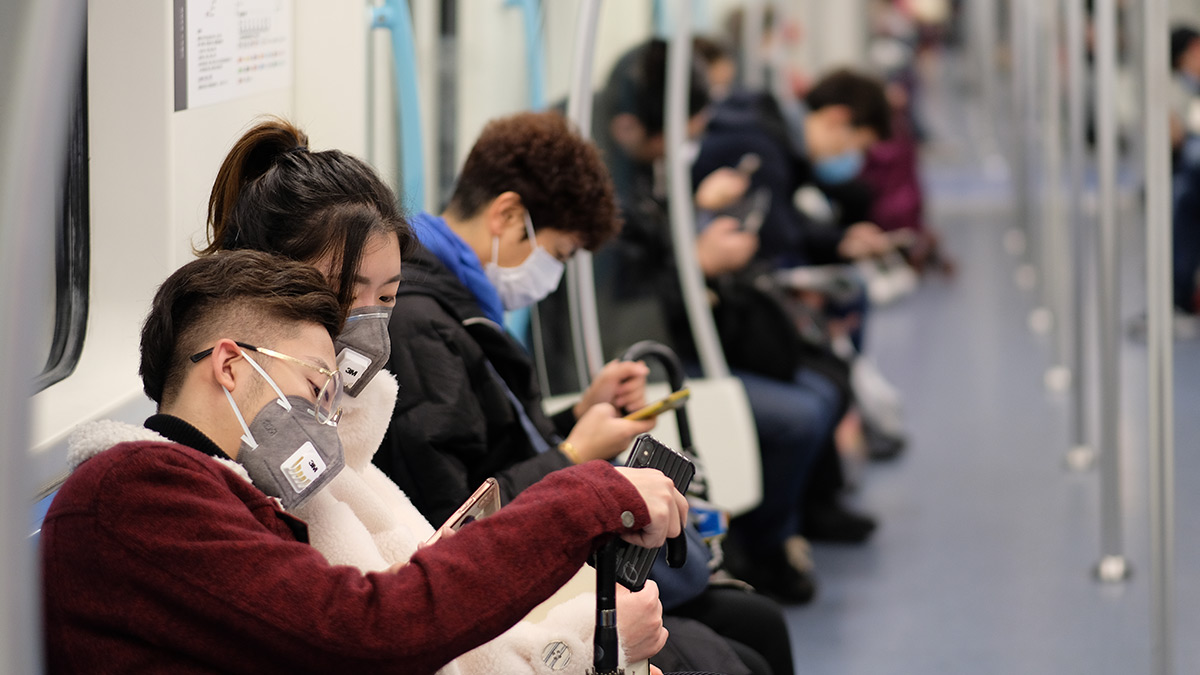 People sitting in subway in Shanghai are wearing surgical masks to avoid getting infected by the novel coronavirus (nCoV) which started from Wuhan City, Hubei Province in China. Early today, February 2, the Philippines has officially imposed a temporary travel ban on tourists from mainland China, Hong Kong, and Macau in order to contain the spread of the nCoV.
PHOTO/S: Robert Wei / iStockphoto.com

Senator Christopher Lawrence "Bong" Go announced that the Philippines has officially imposed a temporary ban on travelers and tourists coming from China and its territories, including Hong Kong and Macau, in order to contain the spread of the novel coronavirus (nCoV).

Sen. Go, the chairman of the Senate Committee on Health and Demography, made the announcement on Sunday morning, February 2, in an interview with Dobol B sa News TV on GMA News TV.

He added, "Taking into consideration the concerns raised by key government officials and health experts, the President made a decision and has agreed to adopt this recommendation and implement it immediately as additional precautionary measure to protect the Filipinos.

The Department of Tourism (DOT) has released an official statement in line with this directive from President Rodrigo Roa Duterte.

DOT has immediately advised its foreign offices in China and its territories to inform all stakeholders/travel agencies bringing foreign tourists, on the latest directive to temporarily ban "the entry of any person, regardless of nationality, except Filipino citizens and holders of Permanent Resident Visa issued by the Philippine Government, directly coming from China and its Special Administrative Regions."

The DOT is also coordinating with the local travel trade sector to ensure the full implementation of this restriction.

According to DOT, the directive also includes the following travel guidelines:

The DOT also noted that they are working closely with all concerned government agencies on taking precautionary steps "to ensure the safety of Filipinos and travelers from other countries who are visiting the Philippines."

DOT Secretary Berna Romulo-Puyat said, "The safety and protection of our citizens thriving in our tourist spots, the employees of the tourism sector, and domestic and foreign tourists alike remain the Department of Tourism's priority.

"We call on everyone in the tourism industry to follow these directives until the World Health Organization (WHO) and the Philippine government deems it safe to resume travel."

NCOV IN THE PHILIPPINES

The Department of Health (DOH) confirmed that there are already two reported cases of the nCov in the Philippines.

A 38-year-old woman who traveled to the Philippines from Wuhan, China tested positive for nCoV last week. Her companion, a 44-year-old man, also tested positive for the virus and unfortunately died on Saturday, February 1, marking the first confirmed death outside China.

During a press briefing on Sunday, February 2, the DOH Secretary Francisco Duque III said that the 44-year-old man developed severe pneumonia. DOH Undersecretary Eric Domingo added that the man had no preexisting illnesses.

Sec. Duque said, "The patient was stable and showed signs of improvement. However, the conditions of the patient deteriorated within the last 24 hours resulting in his demise."

According to CNN, more than 14,000 people have been infected by the nCov outbreak with over 300 resulting in fatalities.