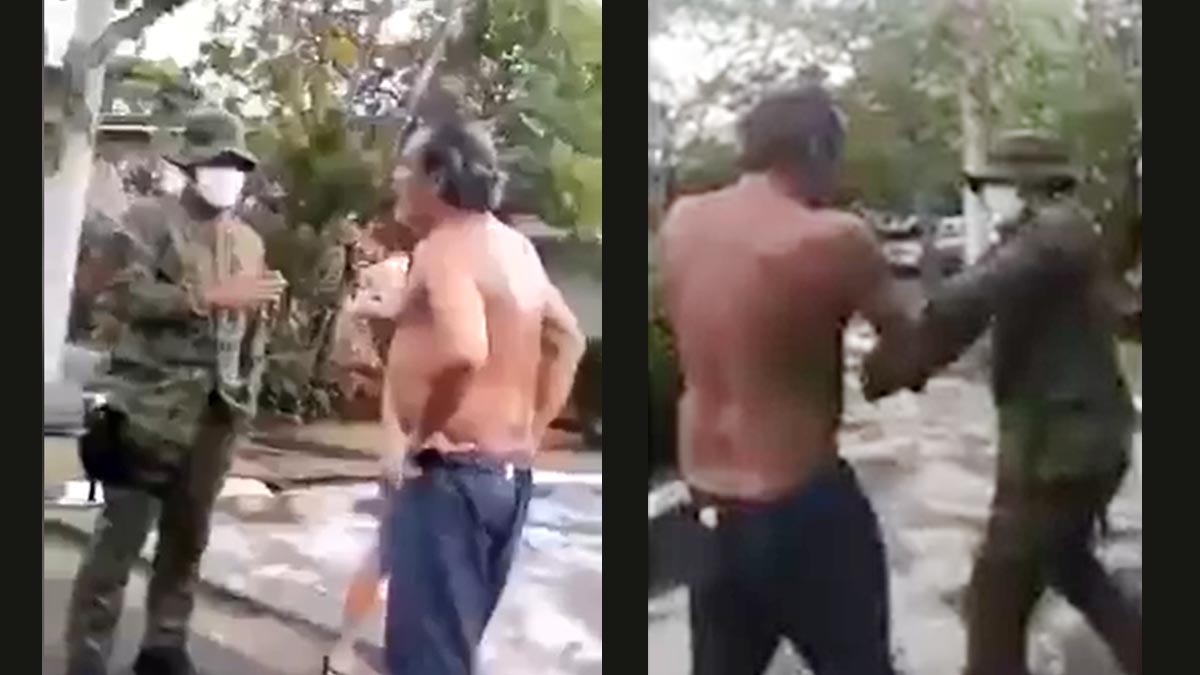 A policeman in Makati filed a blotter against a foreigner resident who refused to obey authorities after allegedly violating quarantine protocols earlier today, April 27, 2020.
PHOTO/S: SCREENSHOT FROM JTF CV SHIELD

Police blotter is the daily written records of events, such as arrests, in a police station.

According to Makati Police Chief Col. Rogelio Simon, his staff confronted the resident's maid, Cherilyn Escalate, for not wearing a face mask while watering plants in the front yard on Sunday, April 26, 2020.

Madrona's admonition is in accordance with the mandate of the Inter-Agency Task Force, the body overseeing protocols during COVID-19, to have residents of Luzon wear face masks to prevent the spread of the killer virus.

Reports said Madrona wanted to hand out a fine of P1,000 to the resident's househelp for the violation.

A video uploaded by JTF CV Shield on Facebook earlier today, April 27, showed the heated dispute between Salvador and Madrona.

Salvador, topless and without a face mask, is seen standing outside his house yelling at Madrona.

"Get out of my house!" he screamed repeatedly at the uniformed officer, scowling.

Salvador, who is the owner of the travel provider Indochina Strings Group, also said, "I'm being respectful, Kuya, but I hate nonsense.

"I have 80 Filipino employees fighting for their lives here.

"And then you come here, you are actually focusing on this stupidity, Kuya."

He also told Madrona to go to Tondo and Manila instead of his house.

Madrona defended himself calmly, "I have an order, that's why I'm here. Just calm down. I'm not going to argue with you."

"You don't need to talk with me when you are under the influence of alcohol because you are not in the normal state of mind."

Parra admitted that he was indeed having a drink inside his house, then went on yelling at Madrona to leave his house.

Makati Police Chief Simon said the police felt compelled to arrest Salvador because he was being too aggressive.

Another video making the rounds online showed Madrona and Gaan attempting to arrest Salvador in his house.

"[They] grabbed my hands and brutally threw me to the ground and caused me physical injury and abrasions...

"He continued to scuffle and keep me on the ground to put handcuffs on me," Salvador told ABS-CBN News earlier today.

Salvador's Filipina wife, who was taking the video, is heard begging the police to let her husband go, as they don't have an arrest warrant.

She forcefully accused them of trespassing.

The scuffle between Salvador and Madrona stopped when Salvador managed to get back into his house.

After the incident, Salvador said he obtained wounds and "immense physical pain" brought about by a previous spinal injury.

They also posted their recordings on social media. These went viral, not long afterward.

According to Barangay Dasmariñas chairperson Rossana Hwang, the video appears to be "one-sided."

She came to Madrona's defense, saying he exhibited an "unfazed" and "cool" attitude despite Salvador's outburst.

"All of a sudden, the resident came out of the house without a mask and began cussing.

"The resident resisted arrest and when he [Madrona] was about to handcuff him [Salvador], the wife said he had spinal injury," she said.

Madrona's superior officer and Salvador settled the dispute by deciding to "just blotter the incident" meaning, they would put the incident on record.

This record can then be used as direct evidence against Salvador, in case he would be charged with a criminal case in the future.

Hwang confirmed that their barangay sought the police's help to enforce quarantine rules in the village.

The barangay captain did not mention if there are other violations inside their village.

In a statement released on the Philippine National Police's Facebook page, today, April 27, PNP Spokesperson General Bernard Banac said that they will conduct an investigation on the incident.

"It is in the best interest of the public health, order, and safety that the PNP is enforcing ECQ rules and local ordinances to conatin the spread of COVID-19," he said in the statement.

"Let me emphasize that police operations to enforce the law are strictly guided by the Revised Police Operational Procedures that every police officer making arrests or police intervention should strictly observe."

"Mayor Abby has ordered the Makati Police to conduct an immediate inquiry into the reported incident at Dasmariñas Village involving policemen and a resident.

"The appropriate charges should be filed against those concerned after a full investigation,” Camiña said.

The Makati City government has been telling residents to adhere to quarantine directives, including the mandatory wearing of face masks and social distancing.