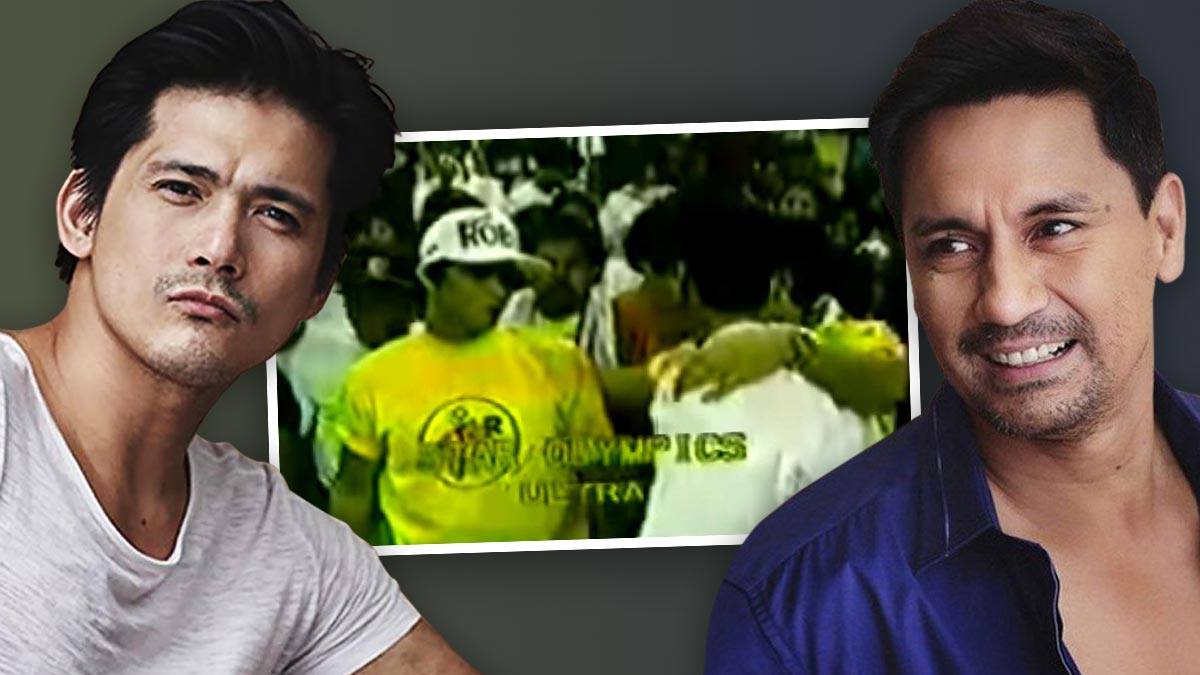 It was a rare treat for fans to see their favorite stars engage in friendly competition—all in the spirit of fun and sportsmanship.

And, surely, they will remember that incident at Star Olympics on July 8, 1991, when a fracas between matinee idol Richard Gomez and action superstar Robin Padilla shook the games.

THE PUNCH THAT SHOOK SHOWBIZ

It started with a feud that looks to have been simmering Richard and Robin for sometime.

Their feud escalated in late 1990, leading up to that fateful Star Olympics encounter.

Apparently, it was an outdoor firing-range event attended by both actors in Meycauayan, Bulacan, on December 22, 1990, that sparked the public spat.

Reports said that Richard and Robin exchanged a few snide remarks during the competition.

The two men presumably left the event holding a grudge against each other.

But it was allegedly Richard's remark in a newspaper that triggered Robin's outburst.

The report quoted Richard saying Robin was “lampa,” which was also supposedly the reason why action star Robin did not want to participate in the Star Olympics.

According to Robin’s discoverer and manager, Deo Fajardo Jr., Robin was in Baguio City to film Miss Na Miss Kita: Ang Utol Kong Hoodlum 2 on the day of the punching incident.

Maristela Ocampo, a close confidant of showbiz reporter and host Inday Badiday, happened to be visiting the set.

An angry Robin stormed the Star Olympics games at ULTRA (now PhilSports Arena) on July 8 to confront his showbiz rival.

A video of the scene showed Robin’s cousin, veteran actor Rudy Fernandez, trying to mediate and diffuse the tension between the two.

Richard, wearing a white basketball jersey, extended his hand to Robin for a handshake.

But an obviously irked Robin, who was wearing a yellow event T-shirt and white cap with his name boldly printed on it, ignored Richard's gesture.

As soon as Richard took his eyes off Robin, the bad boy of Philippine cinema unleashed a straight, right punch on Goma’s face.

The punch caught Richard off-guard, and everyone in the venue gasped in surprise.

A commotion instantly ensued as people scuttled to restrain both stars from turning the confrontation into a total brawl.

The warring actors would later patch things up on the urging of Rudy.

Rudy also invited Robin to be one of the marshals for the basketball championship game.

The backstage truce officially ended the rift and the months-long drama between Richard and Robin.

Richard (Goma) and Robin (Binoe), both huge stars in their prime In the '90s, seemed headed for a collision course.

Although pegged as a dramatic actor, Richard also dabbled in action movies, a genre that was Robin’s turf. Richard was also an athlete—rowing, fencing, biking.

It didn’t help that the press smelled a juicy story in the rivalry between the two stars.

Subsequently, reporters kept writing stories laced with quotes from Richard and Robin supposedly attacking each other. 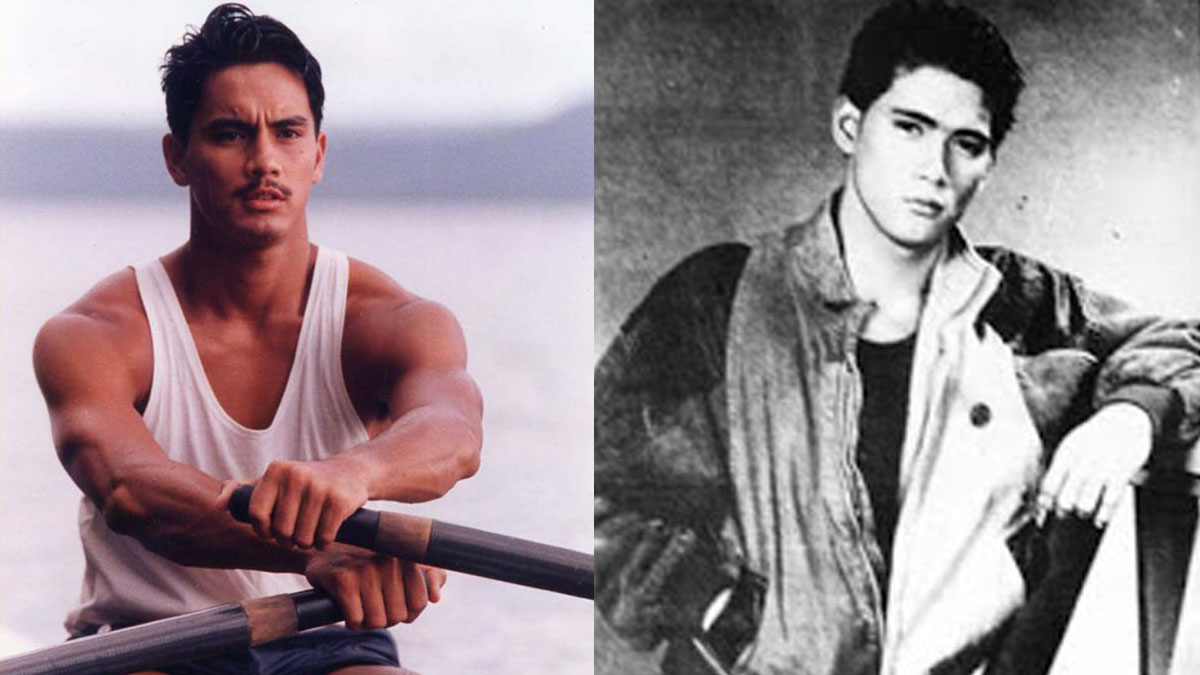 But the rivalry between Richard and Robin appeared to be more than just about two stars staking their claim as the alpha males of Philippine cinema.

It was personal. As the famous French saying goes, cherchez le femme. Look for the woman.

For all of their differences in style, personality and acting, Richard and Robin had a common denominator: Sharon Cuneta.

In 1991, Robin was openly courting Sharon, dubbed in showbiz as The Megastar. The two would become an item, if only for a short time.

The romance blossomed while they were doing the blockbuster movie, Maging Sino Ka Man, which hit theaters in February of 1991.

It would end when Sharon discovered that Robin was, at the time, already involved with someone who was bearing his child. 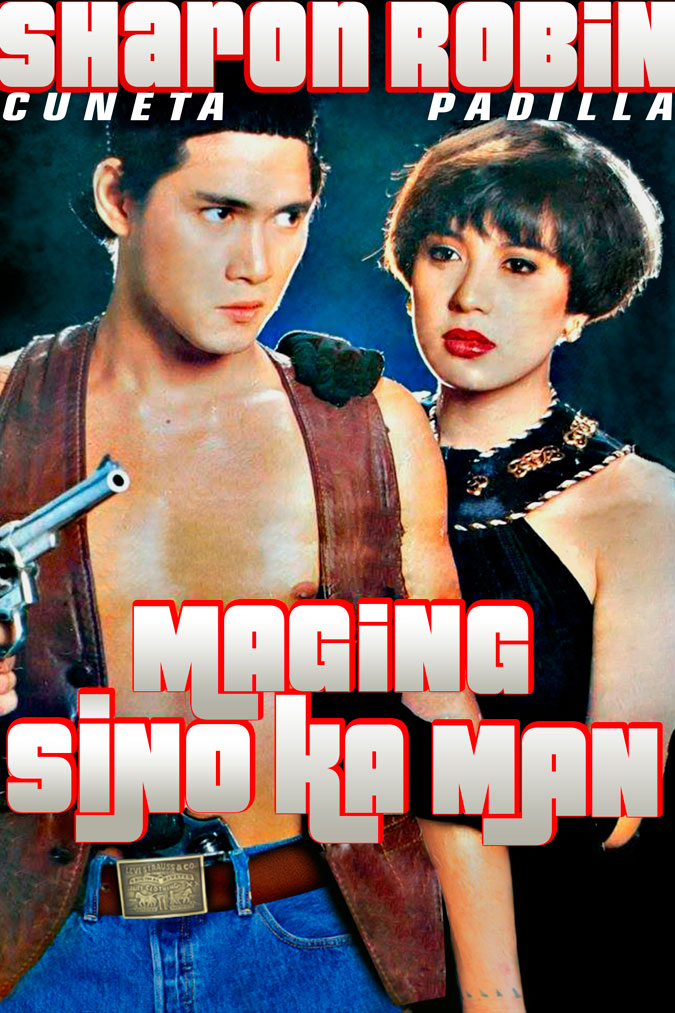 Interestingly, Richard was Sharon’s ex-boyfriend. They met on the set of their movie, Kahit Wala Ka Na, in 1989, and became romantically involved soon afterwards. 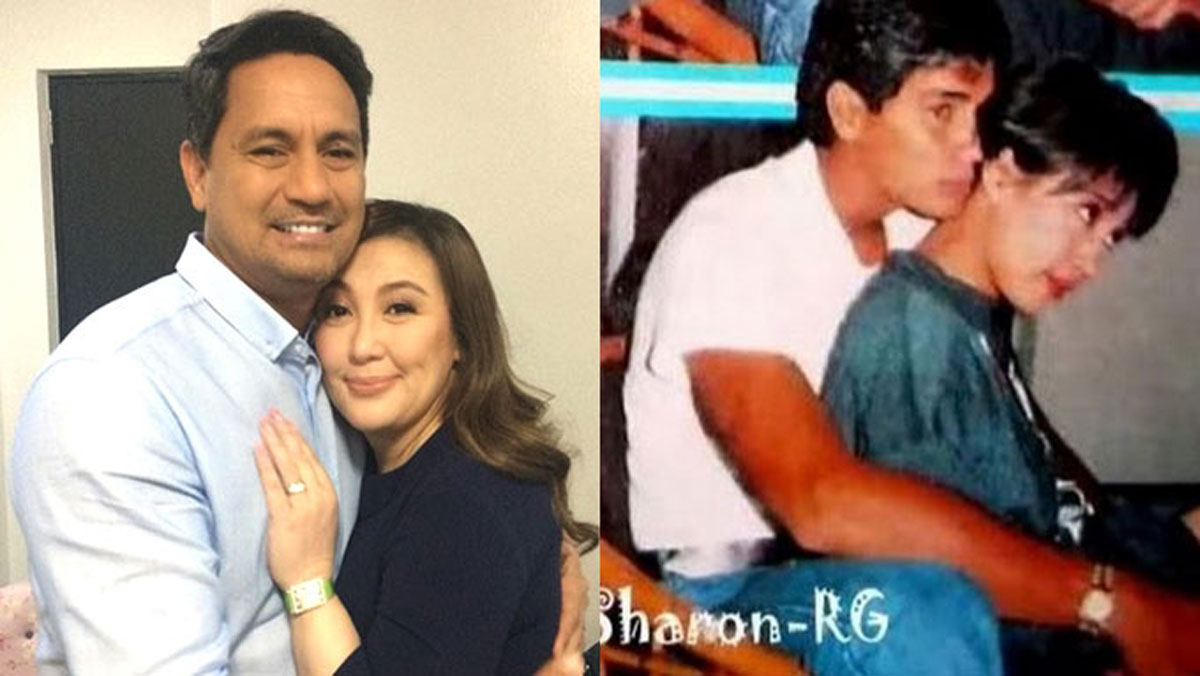 A huge chunk of the Richard-Robin rivalry was shaped around the narrative that the two men were at odds because of their shared feelings for Sharon.

Sharon later described her relationship with Goma as “on and off,” and that their romance persisted even after the end of her romance with Binoe.

Then there was another twist, something that made the story a little more confusing and interesting at the same time.

In a 2010 interview published in the ABS-CBN News website, Deo Fajardo Jr. said Goma and Binoe had another fistfight before their Star Olympics scuffle.

And there to witness the row was the then presidential daughter, Kris Aquino.

Richard and Robin were reportedly summoned to the Arlegui Mansion—the official residence of the Aquinos during Cory Aquino’s tenure as Philippine president—to iron out their differences. 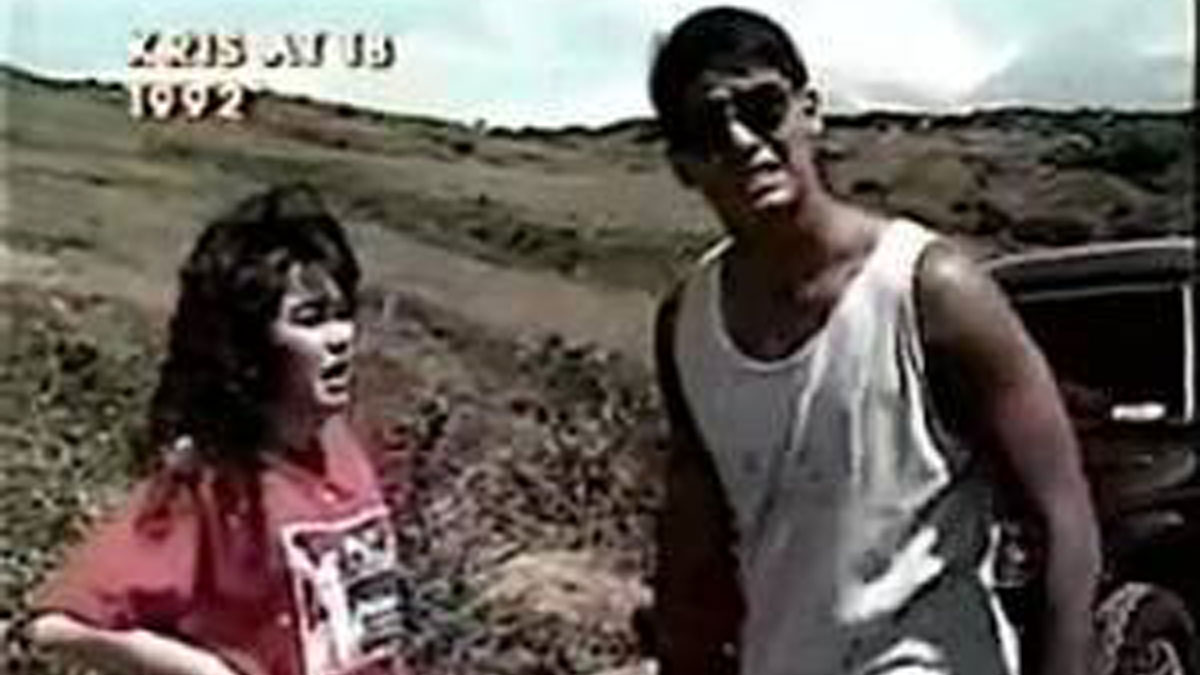 Robin, of course, was Kris’s boyfriend around the year 1989. 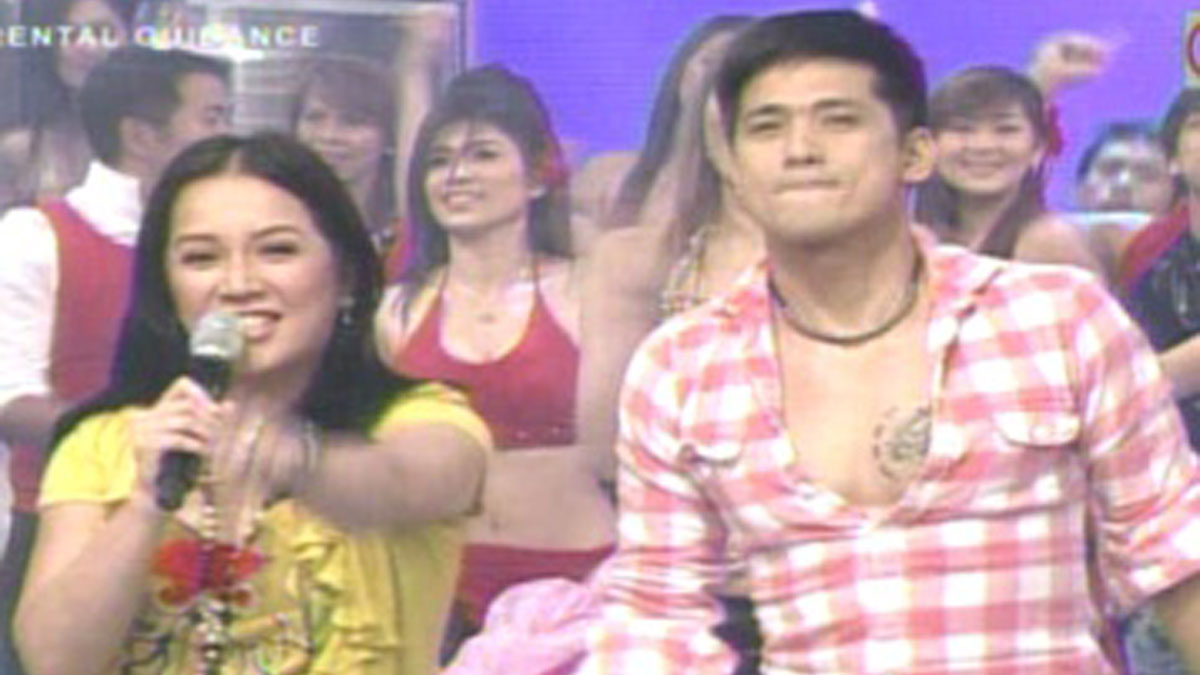 Could it be that the feud between Richard and Robin started way earlier than previously thought?

Perhaps the encounter happened before Robin officially pursued Sharon, and at the time was still heavily involved with Kris?

It was also not clear why Richard was invited to the president’s residence.

It wasn’t fully established if he in anyway pursued or had a romantic liaison with Kris during his younger years.

Richard reminisced about the feud in a 2003 interview for GMA-7’s showbiz talk show S-Files.

He said, “That was a long time ago. Nagkaroon lang ng parang word war, ang nagpalaki nun was the press people.

Now in their 50s and apparently happily married, both actors have put their reel-and real-life rivalry behind them.

Richard and Robin today are known supporters of the current administration.

In 2016, Robin volunteered to campaign for Rodrigo Duterte's bid for the presidency.

Richard is the incumbent mayor of Ormoc City in Leyte, while his wife, Lucy Torres-Gomez, represents the 4th District of Leyte in Congress.

Today, they are together, and together must face the criticism of those who cannot support President Duterte.