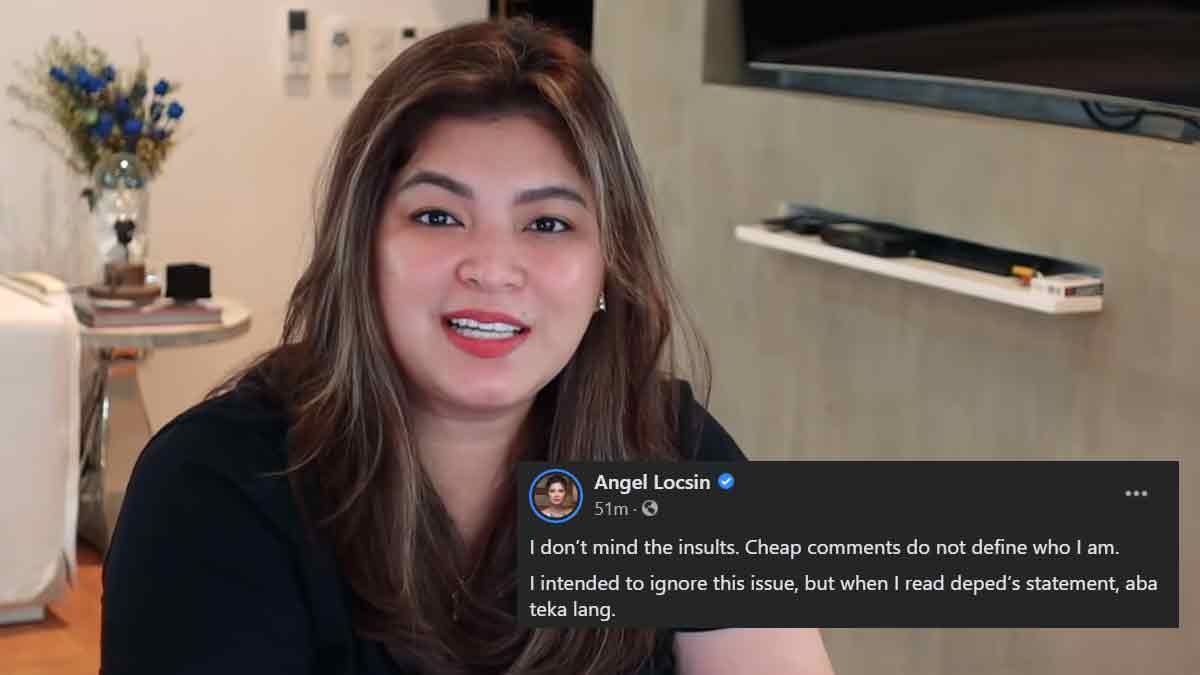 Angel Locsin responds to Department of Education Occidental Mindoro: "What bothers me most is apart from teaching incorrect grammar to the students, DepEd seems unaffected that the said teacher is teaching bad conduct and sowing discrimination among the children. Anong mangyayare sa future kung ang mga kabataan ay tinuturuan ng pambabastos at pangungutya sa kapwa?
PHOTO/S: Screen grab from The Angel and Neil Channel on YouTube / Angel Locsin on Facebook

Angel Locsin responds to the apology of the Department of Education (DepEd) Division of Occidental Mindoro.

The showbiz A-lister initially intended to "ignore" the issue, but the department's apology on the viral education module body-shaming the actress has prompted her to issue a response.

Angel is "bothered" that their apology didn't address the "more relevant" issue at hand.

The statement, released on the actress' official social media profiles on November 15, 2020, reads: "I don't mind the insults. Cheap comments do not define who I am.

"I intended to ignore this issue, but when I read deped's statement, aba teka lang.

"What bothers me most is apart from teaching incorrect grammar to the students, DepEd seems unaffected that the said teacher is teaching bad conduct and sowing discrimination among the children.

"This is the more relevant issue deped, that you should be held accountable and must correct. Sa inyo naka salalay ang pag asa ng ating milyon milyong kabataan."

Angel also asks for the teacher who made the viral module to "apologize to his students and all the students that read the module."

The ABS-CBN star ends the statement with a footnote that she will be deleting this "later." 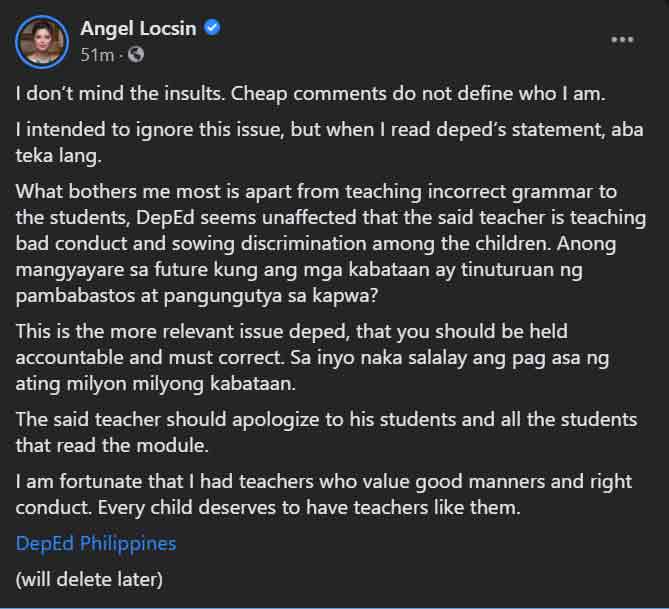 DepEd released its apology on November 14.

The department clarifies that the viral module was a "teacher-made assessment for a Grade 10 MAPEH class." This means that the material was a test or an exam for Grade 10 students.

The statement also says that the Department of Education "does not tolerate nor condone any act of body shaming, ad hominem or any similar act of bullying both in the physical and virtual environments."

It further says that it got in touch with the teacher who made the test questions.

The module made by Keith Richard Firme went viral on November 13, Friday, after an item highlighted Angel as "an obese person."

It read: "SITUATION. Angel Locsin is an obese person.

"She, together with Coco Martin, eats fatty and sweet food in MANG INASAL fast food restaurant most of the time.

"In her house, she always watching television and does not have any physical activities.

"1. What do you think will happen to Angel if she continues her lifestyle?

"2. How do lifestyle affects the health of an individual?"

Firme's name was also posted, and netizens went to his Facebook to express their disgust.

The influx of comments led Firme to deactivate his Facebook profile. 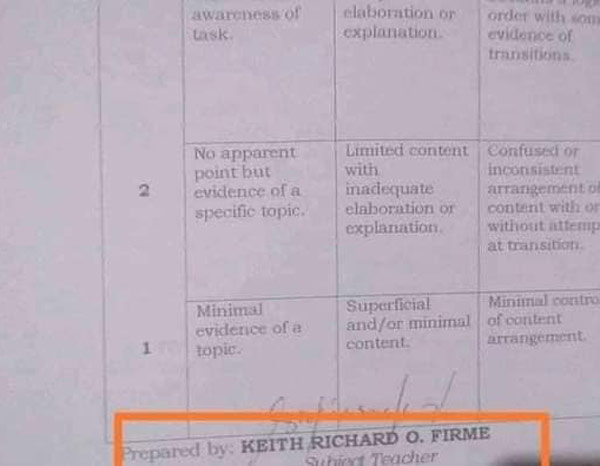