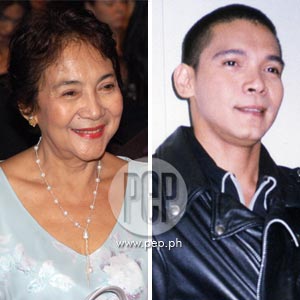 Mrs. Eva Cariño, the seemingly cool matriarch of the Padilla family, broke down as she poured her heart out over her son Royette Padilla's recent complaints against a certain rehab center and his statements against her.

REHAB WOES. Before the interview with Mommy Eva, Royette had already granted a taped interview, also with Showbiz Central, to denounce the unnamed rehabilitation center where he used to be confined.

Royette accused the rehab center management of subjecting its patients to various forms of physical and emotional torture as part of its program.

He proceeded to explain the methods of abuse allegedly being carried out by the center.

The said maltreatment prompted the former character actor to flee from the rehab. The Showbiz Central interview was conducted in a remote area where Royette is currently staying.

As the interview went along, it also became apparent that Royette's discontent was not solely caused by the rehabilitation center. It was then revealed that the Padilla family, particularly Mrs. Cariño, strongly lobbied to have Royette admitted to the center.

Royette accused his mother of constantly meddling in his personal life.

DISCIPLINE NOT TORMENT. The rehabilitation center, however, brushed off Royette's interpretation of the usual practice being administered in any center.

"Face the wall is a form of disciplinary action, to which their parent or their petitioner or their guardian are well informed. Ang essence nito is para maintindihan nila, maisip nila ‘yong mali na ginawa nila," explained Gonzalo Jesus Garcia III, president and managing director of the rehab center.

Garcia denied the "pambubugbog" claimed by Royette, however, arguing that all disciplinary actions are humane and meant to regain a patient's self-worth.

MOTHER KNOWS BEST. Sitting in as a studio guest, Mommy Eva admitted having objections to her son's involvement with H-World.

But aside from the H-World issue, Mommy Eva also disclosed that Royette has a debilitating drinking problem.

Royette's alcoholism, according to Mommy Eva, was a recurring problem, hence the need for her son's re-admittance to the rehab.

The Padilla matriarch said that the rehab center's house rules were very clear to her right from the start and whatever disciplinary action imposed on Royette was just and necessary.

Mommy Eva admitted feeling crestfallen by the sight of her son crying and obviously going through much emotional anguish.