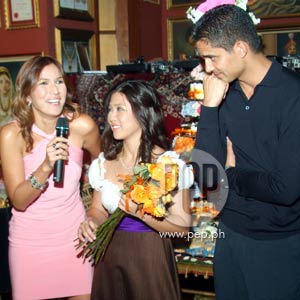 "This is what the public does not know. How can they judge my parents just like that? Well, I think I should know better since I grew up exposed with the buzz and what not, but then, this is big. This is an issue that should be taken seriously, and base everything on the facts," wrote Hayca Bunevacz (middle) in her letter to YES! senior writer Rachel Malaguit. This photo of Hayca with parents Jessica Rodriguez and David Bunevacz was taken a
Hayca Bunevacz sent an email to YES! magazine senior writer Rachel Malaguit this morning, December 19, to express her "need to fight for my parents' right as an individual who lives in a community."

The 19-year-old, the biological daughter of Jessica Rodriguez and the adoptive daughter of David Bunevacz, was reacting to the spate of news involving her parents and the beauty clinic they were part of. Rachel is a writer who had interviewed Hayca in September 2007 through webcam.

"Since they do not want to talk, I will," Hayca writes in her impassioned 11-paragraph email, which Rachel Malaguit says is from California, where Hayca currently lives and where she is studying (Southwestern College).

She asks the President of the Philippines, Gloria Macapagal Arroyo, "who is my parents Godmother," to provide security for her parents, who were in the news after David figured in a reported abduction, where he claims to have been manhandled by persons he still has yet to name.

Hayca's letter comes in the wake of news that David and Jessica have filed a complaint of "physical injuries" with the National Bureau of Investigation against four investors of Beverly Hills 6750.

It will be recalled that the story of David and Jessica's falling out with the beauty clinic was first made public by the Philippine Entertainment Portal (PEP) last December 13.

"I read an article from the PEP website that a friend of mine insisted for me to read. Although I knew everything that has been happening, plus the rumors that has been laid out, it still hurts me inside that people, especially those who have been close to my family for a long time, are accusing my dad and my mom of something that they will never do.

"I believe that what triggered those people to do such horrible thing is jealousy. Of what? They accuse my dad because of money, of having a brand new luxury car, and of a life that has exceeded everybody's expectations. Ever since my dad and my mom got married, they have been living that same life, and not when Beverly Hills came into the picture. We have these things because my parents, especially my dad EARNED it. He works extra hard to provide for us every single day. He had some sleepless nights because of stress; he had down times because of stress. So, every time he becomes freed from that stress, he treats himself and us too of a well done job. That is how he is. He believes that someone only can earn something if that person works hard for it. That is what I will remember most from him. I say this because I see it in him every time he comes home from work, and I hear it in his voice. Besides dad, my mom is also a living example of that.

"She became an orphan by the age of 15 when her mom died. Ever since, she worked her way through not only to support herself, but also to support her four other siblings. When she had me, I became an additional to her family, and she had to work extra hard. There was no one else to help her. She entered modeling, acting, and finally landing into managing artists. I became a witness to her everyday struggles. She endured so much pain which in turn made her a strong fantastic woman. Finally, on 2000 she married the man who changed her life and the life of her two children—me and my brother. At last, we had someone who accepted us and treated us as his own. Never in my life have I ever seen such a brave man who would take that risk in order to be with the person he loves.

"My dad adopted us. He introduced us to a life that we never thought we could have. I saw the transformation of how our lives changed. I grew up playing in the streets, and I was accustomed to that kind of living. However, when dad came, he taught us that life could be better, that it is possible.

"When we had Breanna, my baby sister, things went even better. Although there were a lot of complications that happened to my mom and to us, we went all through those because we stood as a family. There were financial complications, but we just did not stress with that too much because what is money when we have our little angel with us and my mom was saved. That year, we also took a leap of faith, and converted ourselves into becoming Christians.

"Since then, things went well. When my parents thought of putting up the business Beverly Hills 6750, it took my parents a long time on establishing it because they had a group of people who apparently did not want my parents' business to go on. Again, they survived it, thus, the creation of Beverly Hills. I remember dad, mom, and I cleaning the floors of Beverly Hills, and arranging the furniture. Our sweats were on the floor of bh6750. My parents had worked there every day. The only bad thing about it was they were not getting paid for the work they had done, especially my mom. She created all the marketing strategies that the company produced. She was the reason how the company was known to the public eye.

"This is what the public does not know. How can they judge my parents just like that? Well, I think I should know better since I grew up exposed with the buzz and what not, but then, this is big. This is an issue that should be taken seriously, and base everything on the facts.

"Yes. I am speaking out because I need to fight for my parents' right as an individual who lives in a community. Since they do not want to talk, I will. For once, I have been given a chance to speak up for my parents, and I am not letting this opportunity slip away. I need to fight for them. If this is the only way I can, then, let it be. I would not let this lies be taken over my family's lives because we did nothing wrongs. I say we, because when one puts a part of our family down, we all go down as one and rise up as one. All we ever wanted is to live a happy normal life. I guess, some people just won't let that happen.

"What they did to my dad is not right in any way- by law, by nature. Then, only when my parents did the right thing of settling things in court, they got scared so they said lies, terrible lies.

"I am a 19-year-old girl, sitting in front a computer from the other side of the Philippines, hoping that wherever my family is, I hope they are safe. Please. The people in the government, in the authorities and to our President who is my parents Godmother, I ask for help and security of my family for they are constantly threatening the lives of my family. Let justice serve the right people, the right innocent people. Let this be a testimony of how my family is wrongly accused because of the people who cannot accept inferiority.