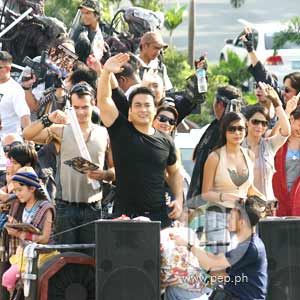 Stars, stars, and more stars graced the traditional parade to mark the opening of the prestigious Metro Manila Film Festival this year.

Unlike last year, the organizers chose a much shorter route for the parade to save time and to avoid unnecessary hassle, especially for motorists, many of whom were last-minute Yuletide shoppers and those traveling back to their respective provinces.

"We want to give everyone, like the celebrities and everyone involved in this, enough time to rest and prepare for the Christmas festivity tonight," explained one of the organizers.

KEEPING TRADITION ALIVE. According to Metro Manila Development Authority (MMDA) Chairman Bayani Fernando, who also serves as the MMFF committee chairman, the Metro Manila Film Festival is a highly important event because it shows that the local film industry is "very much" thriving despite the problems that continue to plague the industry.

Speaking to the press a few minutes before the parade, Bayani stressed the vital contribution of the movies in our culture as well as its unifying effect on the nation as a whole.

Bayani expressed excitement over this year's entries, much to the credit of the producers who invested time and resources to come up with films that will please the general moviegoing public.

Bayani expounded on the sensitive subject of commercial success being used as a gauge for a film to be labeled as the best among the lot.

On the other hand, some producers and film critics have collectively felt that a film should be critiqued more on the basis of its artistic and creative merits (quality, storyline, content, and originality) rather than based purely on revenues. Critics lament that too much emphasis on commercial appeal encourages mediocre, less thought-provoking projects, which consequently stifle the growth of the viewers' tastes and preferences.

The only adjustment made by the MMFF Board this year was to move the awarding to a later date to give film producers ample time to collect and making an accounting of their revenues. This would avoid confusion in making blockbuster claims, as happened in the last MMFF. Awarding for this year is scheduled on January 5, 2008.

STARS EVERYWHERE. The parade started yesterday from the spacious grounds of the SM Mall of Asia in Pasay City. The floats—fully decked with designs to represent the theme of each entry—were on standby in full view of the spectators and some passersby. The parade rolled off as soon as the brass band hit the first note at around 2:30 in the afternoon.

Majority of the lead stars, as well as supporting cast, for each entry were on hand to wave, toss posters, candies and other giveaways to the enthusiastic crowd who filled every stretch of the route.

The four gorgeous ladies of Desperadas—Ruffa Gutierrez, Rufa Mae Quinto, Marian Rivera, and Iza Calzado— all wore fashionable pink outfits as a statement of solidarity and also to attract the eye of spectators. Marimar lead star Marian Rivera, who is also part of another entry, Bahay Kubo, proved to be one of the crowd's darlings.

With comedian Jose Manalo egging the crowd at every stop to chant the film's title, consistent topgrosser Enteng Kabisote 4 was in party mode, its theme song blaring on the float's speakers with full abandon. Vic Sotto, looking good in a brown jacket, was obviously having a grand time waving to the multitude of people, the same people who made Enteng Kabisote a solid force to reckon with year after year in the MMFF. PEP (Philippine Entertainment Portal) took note of the special attention being showered by Vic's son, Oyo Sotto, on Kristine Hermosa throughout the event.

Living up to its a la Transformers concept, Bong Revilla's Resiklo wowed the crowd with its futuristic, majestic float. The actor-senator led the entire cast and entourage. The effort put up by the Resiklo team paid off as they were named this year's Best Float with a corresponding cash prize of P500,000.

One of this year's strongest MMFF bets, Sakal, Sakali, Saklolo—the sequel of Star Cinema's highly successful Kasal, Kasali, Kasalo entry last year—had perhaps the cutest float of all. It resembled a doll house with colorful stuffed toys and dolls. Judy Ann Santos and real-life boyfriend Ryan Agoncillo confidently breezed through the afternoon heat. As an added come-on, the entire gang adopted the irresistible, "Papaya" dance music popularized by Edu Manzano's game show Pilipinas, Game KNB? as the movie (and the float's) soundtrack. SSS was recognized as the runner-up in the Best Float category, which also included a cash prize worth P300,000.

Boxing icon Manny Pacquiao of Anak ng Kumander was nowhere in sight during the parade while leading lady Ara Mina joined the cast a couple of minutes late. According to director Kaka Balagtas, Manny really wanted to participate in the annual celebration but a prior "important" commitment held him hostage.

Another cast member, young actress Valerie Concepcion also decided not to show up. Valerie and Balagtas had a rift after the veteran director allegedly forced her into a "torrid" kissing scene with Manny. Valerie's manager, Becky Aguila, protested that a kissing scene was totally unnecessary, given her ward's wholesome image.

When asked by PEP if he's offended by Valerie's open refusal to join the Anak ng Kumander entourage, Kaka simply let out a pained smile before saying, "Okay lang. Nothing."

The absence of Maricel Soriano did nothing to take away the glitter in Bahay Kubo's presentation, which, as the title suggests, was very native and very Filipino. Bahay Kubo was adjudged the third Best Float with a cash prize of P100,000. Leading the Bahay Kubo team during the parade were Shaina Magdayao, Yasmien Kurdi, and Rayver Cruz.

Though not as grandiose as the other floats, Banal, Katas ng Saudi, and Shake, Rattle and Roll 9 made up for it with the participation of their respective top-caliber stars. For Banal, Christopher de Leon, Paolo Contis, Alfred Vargas, and Paolo Paraiso kept all the women spectators drooling and screaming for their attention. The tandem of Lorna Tolentino and Senator Jinggoy Estrada of Katas ng Saudi drew one of the loudest cheers from the crowd. As expected, Shake, Rattle and Roll 9 boasted youth, talent, and oozing appeal. Controversial heartthrob Dennis Trillo along with sexy young actress Katrina Halili led the charge for the legendary horror flick.

WRAPPING UP. From SM Mall of Asia, the parade traversed Roxas Blvd. to T.M. Kalaw and ended at the Qurino Grandstand. A short program entertained the people who had gathered at the Grandstand to see their favorite celebrities.

The mini program, where all the stars who participated in the parade were presented, was hosted by Archie Alemania, Asia Agcaoili, Smokey Manaloto, and Say Alonzo. MMFF officials as well as Manila Mayor Alfredo Lim were also on hand to address the crowd.

Some chaos ensued when security personnel failed to seal and check the backstage area, consequently allowing several fans to infiltrate the space. The celebrities became uncomfortable and some were even mobbed by excited camera-carrying fans.

The presentation of the stars ended before 7:00 p.m., after the Best Float awards were handed out.