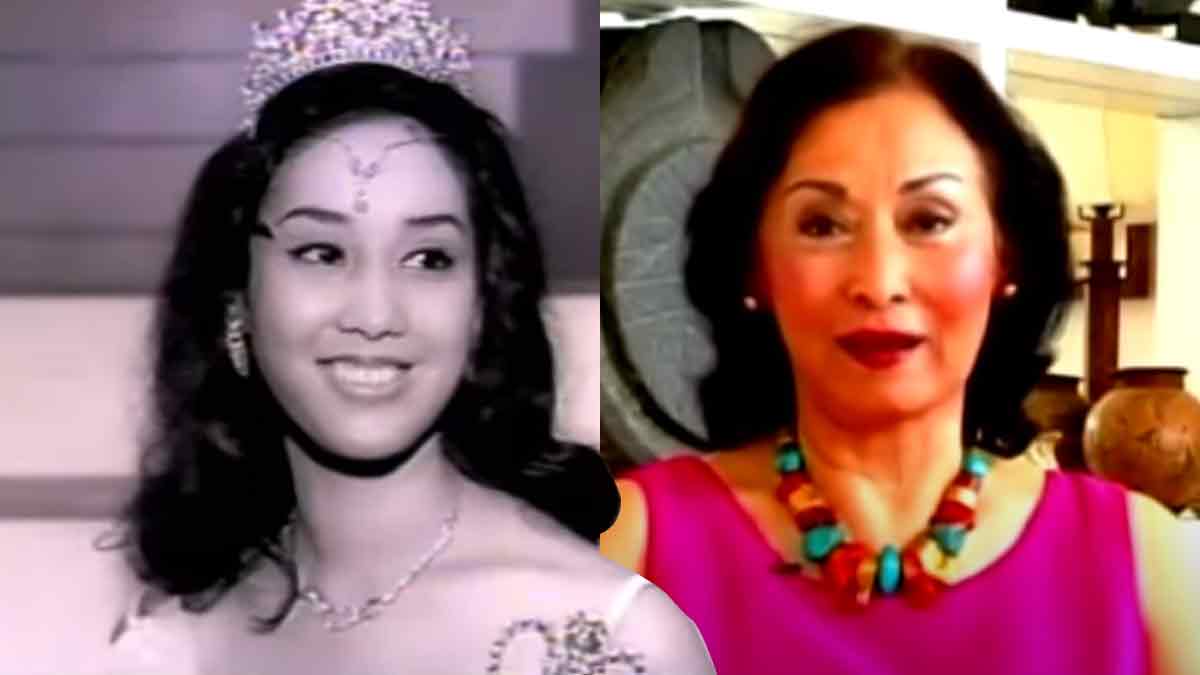 Gemma Cruz Araneta holds a place in pageant history as the first Asian and Filipino woman to win the Miss International title in 1964. The former beauty queen turned writer-historian reveals how her win might have been associated with the Vietnam War.
PHOTO/S: Historycentral / PTV on YouTube

Gemma Cruz-Araneta recalls her historical win at the Miss International pageant in 1964.

Known as the first-ever Filipina to bring home an international beauty title, Gemma reveals how politics can play a big part in the world of pageantry, especially in its early years.

The beauty queen turned historian and heritage activist underlines, in the July 10 episode of the Flipping The Narrative podcast, that beauty contests "have a political origin."

The Miss Interntional 1964 titleholder says, "It started in the Cold War after the Second World War when the United States—that's where it started—avowedly wanted to promote world peace, international friendship, things like that."

When Gemma was in her last year in college, a female professor exposed beauty contests as "an instrument of the Cold War."

Gemma recalls, "I had a professor, Filipina, who studied in the U.S., and she was teaching us Political Science.

"And she was saying the most outrageous things about beauty contests. She said, 'You know, that’s an instrument of the Cold War.'"

Her professor then cited the win of Finland's Armi Kuusela, the first-ever Miss Universe titleholder.

"'Did you know that Finland was the first country to pay their war debt to ths USA?' So, we were saying, 'What do you mean?'"

Afterwards, Gemma began to notice a trend in pageants: "I noticed, after that, there was a period when the United States really advocated regime changes in South America. That's a nice way of putting it.

"They would always overthrow presidents whose ideas they didn't like...Well, a series of that.

"And coincidentally, all the winners were from South America."

This observation later paid off for Gemma when she became the country's representative for Miss International in 1964.

THE VIEtNAM WAR aND MISS INTERNATIONAL

When the Miss International 1964 competition was held, the Vietnam War was still happening and the United States was under scrutiny for getting involved in the war.

Seeing the political issue that the United States was facing, Gemma thought, "Maybe this is the right time for an Asian, you know, to win."

And her theory was later confirmed when she arrived in California. At that time, the Haiphong Harbor in Vietnam got bombed.

The now writer-historian narrates in the podcast: "When I arrived, I was interviewed and I said, 'Oh, I thought I wouldn't be able to come because, you know, Haiphong Harbor got bombed and my parents didn't want me to come.’

"Nako, I got a call from a nameless Filipina. She called the hotel, she was connected to my room and said, 'Oy, Miss Philippines, gusto mo bang manalo o hindi? Stop talking about Vietnam! They don't want to hear things like that here.'

"She banged the phone on me. Oh my god!

"So I thought, 'Whoa, my professor was correct! There's something political here!'"

Apart from the Vietnam War, another political issue was unfolding. This time, it directly concerned the Miss International pageant.

Gemma recalls a demonstration taking place in front of the hotel where the beauty contest was to be held.

Protesters were accusing the pageant of "being racist" because none of the "colored girls" had a title yet.

Gemma knew her movement would also play an important role in the coronation. She says, "I thought, 'Ah, so there are two issues here. The Vietnam War and the civil rights. Those movements about race... so what would it be?'"

Newspapers in Long Beach, California were reporting at the time that the three top contenders were Miss America, Miss Brazil, and Miss Philippines.

Recalling this, Gemma says she saw how all three candidates had political agendas attached to them.

A win for Miss America would be a boost of morale for their country, especially with American soldiers continuously being recruited for the Vietnam war.

A win for Miss Brazil meant the pageant was finally giving people of color a spotlight, while a win for Miss Philippines meant trying to get the good side of then President Diosdado Macapagal.

Gemma mentions, "The U.S. was asking Macapagal to send troops and he didn’t want to send troops... So, those were the things that were going on in my mind!

"I don't know whether I was overanalyzing this because of what one professor told me in college or if that was really how things were run in those days."

The moment that might have had secured Gemma's win for the crown was during a short speech.

Candidates were asked to give a short speech about what they intend to do with the prize money if they would win.

Recalling how she came with her answer, Gemma says: "I personally thought, 'Well, if I'm going to win, I have to use this money in a very significant way.'

"I don't want to just buy jewelry or expensive clothes or a car, I want to use it in a significant way.

"So, I thought I should donate it to Boystown. Because anyway, the Miss Philippines was a fundraiser for Boystown.

"When I had won and I had announced that, my mother said, 'Huh, you really know your politics, don't you?'"

Gemma remembers asking her mother: "'Why Mommy?' [Her mother replied] 'Because you know how Americans are. They always want to know where the aid that they are giving you is going.'"

She then quipped to her mother, saying: "Well, I told her, 'Mommy, I learned my politics from you.' Americans, they are so obsessed with giving aid because they would give aid to all over the place. But they wanted to know what you were going to do with it."

And it seemed Gemma's answer was exactly what the Americans wanted to hear.

She was then crowned as the first Asian and Filipina Miss International titleholder.