Is the Gretchen Barretto-Dody Puno romance really over? 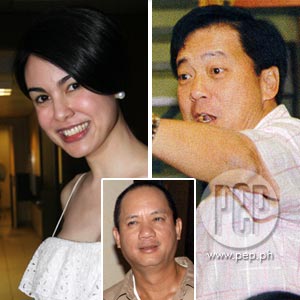 Gretchen is said to have cut ties with Dody, and remains with Tonyboy in the Dasmariñas Village home, which they share with their daughter Dominique.

The latest report to reach PEP (Philippine Entertainment Portal) about media celebrity Gretchen Barretto, 37, is that she has split up with government official Rodolfo “Dody” Puno, 58.

The talk that Gretchen, the beautiful common-law partner of billionaire Antonio “Tonyboy” Cojuangco, 55, was carrying on a romance with Dody Puno, executive director of the Department of Public Works and Highways, began to be whispered about in the middle of the last year and began leaking through the tabloids toward the end of the same year.

At no time during the supposed six months that the romance lasted, however, have any of the three parties ever confirmed the rumor. To this day, they have not.

However, enough sources from politics, showbiz, and Forbes Park assert that Dody Puno—often mistaken for a lawyer (even by PEP, in previous articles) because he belongs to a family of lawyers—had been dating and kissing Gretchen in very public places. Gretchen was also said to have become a regular guest at the Puno family’s social gatherings.

All together, the past three months had been filled with scattered first-person to third-person accounts of witnesses, all leading to the conclusion that the actress and the government official were smitten with each other. Their relationship, a member of the Puno family member was allegedly quoted as saying, had reached a serious stage: Dody had offered Gretchen marriage.

Now comes talk that the two have broken up.

There are no details, except that the information comes from a source very close to Dody.

Earlier, there were stories, again unconfirmed, that Tonyboy had finally put his foot down and told Gretchen: “If you want to leave, go. But Dominique stays. And you leave as you came.”

The love story of the reclusive Tonyboy Cojuangco, whose family’s properties once included the Philippine Long Distance Company (PLDT), and the gregarious Gretchen Barretto, whose family is known for its beautiful women, including movie stars Claudine and Marjorie, has been consistent about one thing: Tonyboy has always indulged Gretchen.

Through Gretchen’s very public quarrel with his mother Imelda Ongsiako-Cojuangco, her shopping whims, showbiz tiffs, and right through the May 2007 Internet scandal where she was photographed kissing actor John Estrada on the lips, Tony has always been known to back Gretchen.

Even when the Dody-Gretchen story was getting hot, and Tonyboy was said to have heard about it from his own sister, who in turn had gotten first-hand reports from her trusted friends, his first instinct was to back Gretchen. Reportedly, he told his family to stay away from this. To his closest friends, he reportedly said: “Let’s just wait for her to get over it.”

Until recently, that is. This was when Tonyboy supposedly gave Gretchen an ultimatum to drop this liaison or leave his home for good. Now comes the highly reliable report that Gretchen has broken up with Dody.

According to YES! Magazine’s August 2007 issue, Tonyboy is still legally married to Denise Yabut, a beautiful, bemedalled equestrienne whom he married in civil ceremonies officiated by Denise’s father, the late Makati mayor Nemesio Yabut. No one seems able to explain why Tonyboy has not filed for an annulment of his marriage to Denise even after a separation of more than 15 years. Denise herself has moved on to other relationships, and Tony has been with Gretchen for at least 13 years. Tony and Gretchen have a 12-year-old daughter, Dominique.

Those close to Gretchen know that she definitely wants to walk down that aisle. They also know that this is a weak spot in Gretchen’s armor, and as a rule, they do not bring it up. When she does bring it up, they say, she is not likely to complain. Instead, she’d say: “I can’t complain. I’m living a life I never even dreamed possible. I’m blessed. Tony loves me and I have Dominique.”

One of these friends now says that the reason Gretchen was attracted to Dody, as she was with John Estrada, is that “he dared.” The idea being that no male ever dared go up to Gretchen to even flirt. Dody did. John did.

But the reason, says this friend, that Gretchen’s dalliance with Dody took a serious turn, where the one with John did not, is because Dody offered marriage. And while Tonyboy is on a league of his own money-wise, Dody comes from an influential family with means. Dody is the brother of Atty. Ricardo “Dong” Puno of ABS-CBN’s News & Current Affairs, Atty. Reggie Puno of ABS-CBN’s legal office, and Secretary Ronaldo “Ronnie” Puno of the Department of Interior and Local Government, putting the family within President Gloria Macapagal-Arroyo’s powerful circle.

However, Dody’s offer of marriage does not surprise his friends, according to a showbiz insider. In his words, “Style niya talaga yun. Marami na siyang napangakuan ng kasal dati.”

As far as everyone knows, the fellow is single. He is known to say that his marriage to Baby Pijuan, the sister of former Miss International Aurora Pijuan, was annulled when he was 35 years old. (He is now 58.) Baby and Dody have three grown-up children, one of whom manages Alchemy, the club Dody owns.

After he separated from Baby, reports say, he lived with Vicky Garcia, a commercial model and beauty queen in the ‘80s. He had two children with her. He is said to have offered marriage to Vicky, who is herself well-off.

But in the mid-‘80s, before Dody could marry Vicky, he fell for beauty queen and actress Alma Concepcion. They have one child. He also offered Alma marriage. But up to the time Alma split from Dody, there was no trip to the altar. Still, the two remain friends, and were last seen together publicly in last year’s birthday party for their seven-year-old son.

Since then, there have been rumors of liaisons with showbiz stars, including Ara Mina. But also within the last seven years, says a showbiz editor who knows Dody, he has been with a non-showbiz girlfriend. Whether he offered marriage to her or not is not known. What is known is that while he was with the girl, he fell for Gretchen—and offered Gretchen marriage.

But now, the Dody-Gretchen romance is over.

When the public will be told the real score about the short-lived romance is not certain. Dody and Tonyboy are not expected to talk. Gretchen is not talking.

Gretchen has always been known to shoot her mouth off when she wants to, and gets into controversies precisely because she speaks her mind. Even when she doesn’t want to talk, she does. At the height of the John Estrada “kisscandal,” for instance, she owned up to her mistake by sending this text to the entertainment press: “Pardon my silence. When I’m good and ready, I shall face the world regardless of the price I must pay. I am in awe with the kind of understanding, endless love, and overflowing patience that Tony gives. These are big enough for the countless mistakes I make. I can say that I value these the most. I’m now comforted with Tony’s tight and long hugs, the only craving that could possibly ease the hurt and shame.”

But so far, about Dody Puno, Gretchen has not said a word to the press. To friends in ABS-CBN who asked, she denied that she was having a liaison with Dody. To others, the most she has said is: “Let them talk. I’m just having fun.”

PEP wonders: Is it safe to assume that the fun is over?