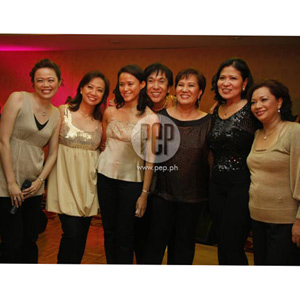 The 50-something birthday celebration of GMA-7's senior vice-president for entertainment, Ms. Wilma Galvante, gathered a roomful of Kapuso stars to wish her well and show their love. Last night, February 22, the Imperial Palace Suites in Timog Avenue, Quezon City, became the setting for a star-studded event that lasted until the wee hours of the morning.

A dance floor was set up in the middle of the room to serve as a stage for the performers who were tapped to do a ballroom dance number that night. The performers had no less than program manager Redgie Acuña-Magno, AVP for talk shows/musical/specials Darling de Jesus, AVP for alternative productions Gigi Santiago-Lara, Regal Entertainment's Roselle Monteverde-Teo, renowned stylist Ricky Reyes, VP for entertainment Marivin Arayata, and the birthday celebrator herself, Ms. Wilma Galvante.

Ricky Reyes told PEP (Philippine Entertainment Portal) that they joked around during their first few days of practice and took it seriously only the night before their presentation. They showed off their skills in dancing the foxtrot, cha cha, swing, among others.

Dance instructors were tapped to serve as partners for the women who wanted to try their hand at ballroom dancing. For most part of the evening, GMA-7 executives preferred to dance ballroom, while the young stars stayed together to chat and drink among themselves.

Ms. Wilma's mother, Norma, flew in from Vancouver, Canada, to attend the celebration. She even requested that her photograph be taken with Richard Gutierrez, the lead actor of Kamandag. The birthday celebrator took the photo herself.

Giselle Sanchez was the first to offer a song number for Ms. Wilma before leaving immediately for another commitment. Dancing turned into a jamming session with Lovi Poe, Rita Iringan of Ryan Cayabyab's Sugarpop, Ricky Davao, and Tyrone Perez rendering songs for the birthday lady. Arnel Ignacio entertained the crowd with a comic routine that became a big hit among the stars.

Jennylyn Mercado walked into the venue hand-in-hand with her manager Becky Aguila. The latter's presence had the spectators asking, "Bati na ba sila?" The answer was not clear but then Ms. Wilma and Jennylyn gave each other a hug that lasted for several minutes.

Later that night, the three-month pregnant Jennylyn sang "Killing Me Softly" before leaving at around 11:00 p.m.

Siblings Paolo and Bubbles Paraiso were also there. Bubbles was seen dancing with writer Allan Diones of Abante.

Alessandra de Rossi was her usual hyperactive self. Even when she wasn't on the dance floor, she kept on dancing. Her ex-boyfriend Jeremy Marquez arrived much later.

Among the couples who arrived were Janno Gibbs and Bing Loyzaga, and Vicki Belo and Hayden Kho Jr.