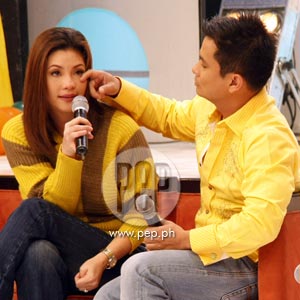 Upon his arrival from Bangkok, Thailand, StarTalk was able to ask singer-songwriter Ogie Alcasid (right) his opinions about girlfriend Regine Velasquez's (left) rumored transfer to ABS-CBN and his annulment case with Michelle Van Eimeren.

StarTalk was able to meet up with Ogie when he arrived at the airport alone last Friday, February 22, to attend to his duty as a Pinoy Idol judge. Updates on the Bangkok trip, as well as his opinion on Regine's rumored plans of transferring to ABS-CBN, were generously given out by the tired but accommodating artist.

News has it that the annulment case between him and Michelle Van Eimeren was finally granted. Ogie, however, denied this.

"Huwag natin pangunahan ang hustisya," he said politely. "In fact, I can't really talk about it. I really can't comment about it."

Changing the subject, StarTalk asked for Ogie's reaction to Regine's plan to move to the Kapamilya network.

"GMA Network Inc. values Regine Velasquez as an exceptional and professional artist. It is true that in the past several weeks, there have been continuous discussions and negotiations between Regine, her manager, Cacai, and the officers of the network. We are thankful that at this point there is now a more open communication and clear-cut projects to suit both the network's programming and Regine's schedules."

In short, there's a bigger chance Regine will remain a Kapuso.