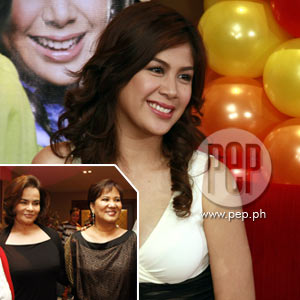 Last week, PEP reported that Becky Aguila attended the pre-birthday party of GMA-7 executive Wilma Galvante at the Imperial Palace Suites on February 22. It can be recalled that the two ladies had a rift last year when Angel Locsin, one of the biggest stars of GMA-7 that time, decided to transfer to the Kapuso network's rival network, ABS-CBN.

When PEP asked Becky about her feeling during the party, the talent manager replied through a text message: "I was really nervous and confused how to react but when Ma'am Wilma gave [Jennylyn Mercado] a tight embrace, I felt relieved. Before we left, Ma'am Wilma reassured Jen that they'll take good care of her and that was enough assurance for me that everything will be all right. I felt good. Ma'am Wilma was very kind and sincere."

She added, "I'd like to thank Ma'am Avin [Marivin Arayata] and Ma'am Lilibeth [Rasonable] for paving the way for me and Jen. Thanks for the invitation. 'Twas good to see old friends in GMA."

If there is one person who is glad about this reconciliation, that will be Valerie Concepcion. She is one of the talents of Becky who also transferred from GMA-7 to ABS-CBN.

During the media junket prepared for the movie Supah Papalicious last night, March 6, Valerie told PEP (Philippine Entertainment Portal) about her reaction when she knew about the reconciliation of her manager and the GMA-7 executive.

Now that everything had been settled, will people see Valerie doing some project in her former mother network, GMA-7?

This means there's little chance for her fans to see her back at GMA-7. The 20-year-old added, "Whole career ko is co-managed na with STRAM. Exclusive ako with [ABS-CBN], that's what I know."

ANGEL LOCSIN. Since Valerie and Angel transferred to ABS-CBN almost at the same time, there are people who try to compare the status of their career in their new home. Valerie has a regular TV show, which is Wowowee, and a movie with Star Cinema, Supah Papalicious. Angel, on the other hand, only has a primetime soap, Lobo, opposite Piolo Pascual.

Valerie said she does not mind whoever gets the most number of projects between her and Angel. Instead, she pleaded to the public, "Naku, sana naman hindi na nila kami ikinu-compare kasi parang napaka-unfair naman. I mean, Angel Locsin na siya. Alam naman natin na may mga plans talaga ang ABS-CBN sa kanya, di ba? Siguro we just have to wait what those projects are.