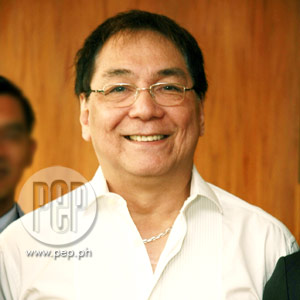 Joey is so excited with the idea of a VST & Co. reunion that he is more than willing to handle songwriting duties if called to do so. "Kung gustong buhayin ang VST, ako lahat [ang] magliletra... Basta ako sa letra, laban tayo diyan," he said.

VST & Co. rose to popularity in the '70s and is credited as one of the bands responsible for ushering the so-called "Manila Sound." The group was touted as our answer to the Australian pop band turned disco group, the Bee Gees.

Although not officially listed as a member, Joey de Leon was an integral part of VST & Co.'s creative process. Joey wrote "Ipagpatawad Mo" and "Awitin Mo, Isasayaw Ko," two of the most memorable VST & Co. songs.

TVJ TOUGH HITS. It was also during the '70s that Joey invited both Vic and Tito to join him in the afternoon variety show Discorama. Merging their wits together, the trio inserted a segment called "Tough Hits" where they parodied various Top 40 hit songs. Joey made up most of the lyrics.

The segment gained enormous popularity and was even acknowledged as Discorama's saving grace. Tito, Vic, and Joey's humorous act introduced the trio to the public as serious comedians. Years later, a rapper turned comedian named Michael V would incorporate the same act in his repertoire to boost his career.

Vicor Music Corporation later released "Tough Hits" as an album. Due to the enormous amount of materials collated from the Discorama "Tough Hits" segment, the collection was issued in 12 volumes, which continues to sell even to this date.

Strange as it sounds, the trio never receives any monetary reward from record sales of the collection. "Puwera lang ‘yon sa VST [& Co.]," clarified Joey. "'Yong sa VST, talagang may tinatanggap kami," he added, talking about royalties and other fees.

In an article posted yesterday, March 13, PEP (Philippine Entertainment Portal) reported Joey's desire to devote more of his time to writing and other creative endeavors. Writing songs is one of the many avenues he'd like to revisit.

HONORED IN HOLLYWOOD. Just recently, the trio of Tito, Vic, and Joey (TVJ) flew to Hollywood to grace the first Visionary Awards held at the prestigious Kodak Theater.

Tito Sotto, Vic Sotto, and Joey de Leon were conferred the honor Outstanding Variety Show Hosts for their untiring work in the country's longest running noontime variety show Eat Bulaga! The show has been around since July 30, 1979.

"Okey, nakakatuwa ‘yon," winked Joey to PEP while signing a few copies of Kagat Labi. TVJ was in full-force and even Eat Bulaga! co-host Francis Magalona was there to accept his own trophy for Pioneer Award for Music.