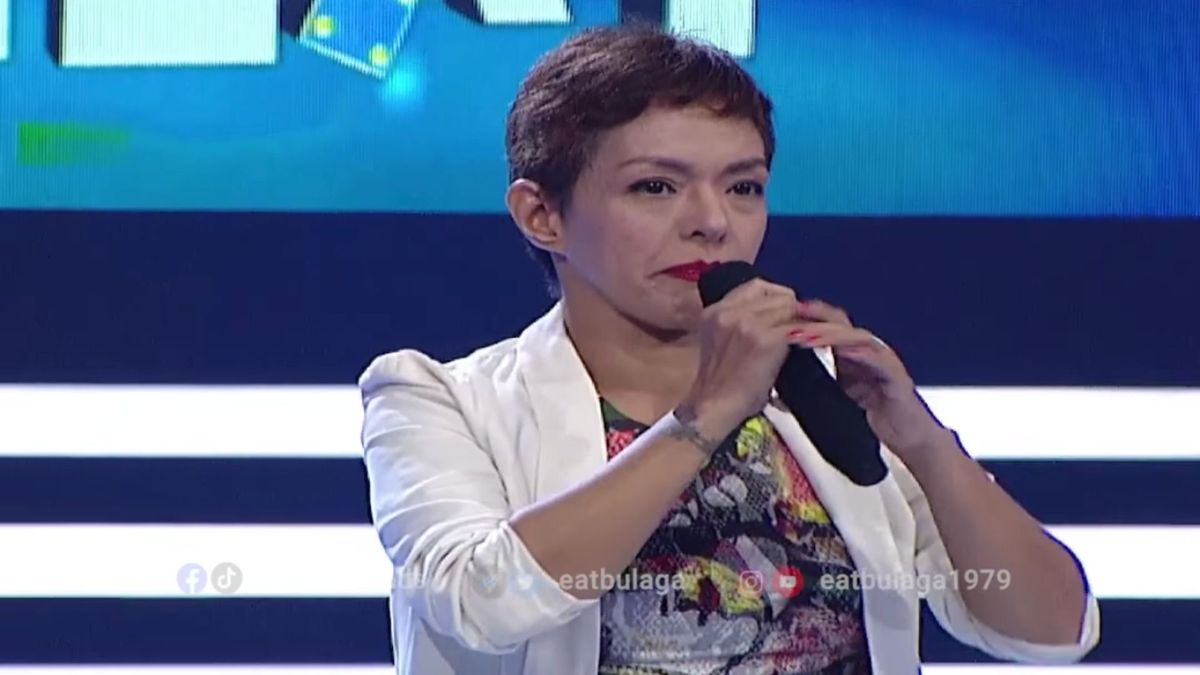 Maegan Aguilar: "If I cannot have a life as a daughter, then I should just work on being a mother."
PHOTO/S: Screengrab from Facebook

After being away from show business for a long time, Maegan Aguilar, daughter of Filipino folk artist Freddie Aguilar, returns to the small screen through Eat Bulaga's talent search competition "Bida Next."

On July 23, 2022, Eat Bulaga uploaded a video on Facebook sharing a clip from Maegan's segment on Bida Next.

In the video, Maegan reveals that she has not kept in contact with her eldest son, Zane, who is now 16 and lives in Houston, Texas.

"Hopefully my son gets to see this and sees me now that I miss him. I miss my son," she continued.

When Eat Bulaga host Allan K asked her if she would like to send a message to her son through the program, Maegan excitedly agreed.

"Mommy's here and I'm still trying my best so that when you come to the Philippines, you can live with mommy, and you'll have a special room in my house. Don't forget me, okay? I love you. I love you, Zane."

Maegan also added that aside from her 16-year-old son, she also has two other daughters who are living here in the Philippines.

In the Instagram photo above, Maegan shares a throwback picture featuring her estranged father Freddie Aguilar with her three kids.

"And then yung bunso ko, I get along naman with that ex of mine, so I see her when I can. Kasi nga po andami ko pong pinagdaanan, e. Lalo na nung pandemic. I kind of lost everything."

Jose Manalo then asked Maegan what song reminds her of her kids, to which she answered: "The Way I Feel Inside" by The Zombies.

"It's like a lullaby na, and it means a lot kasi, di ba, the song is parang nahiwalay, e," she stated.

The "Bida Next" contestant also disclosed her current situation with her estranged father, after revealing she finally tied the knot with her on-and-off partner since 2016.

Despite reconciling in 2015, Maegan reveals, "Because of the choices I made in my life, he doesn't approve. And so it's hard to explain, right? Mahirap mag-explain so pinapasa-Diyos ko na lang din iyon na one day I could be fixed with my father as well," she answered.

After everything she's been through, Maegan has finally decided to remain optimistic about the road ahead.

"Right now I have to focus on the future, whatever it is. That's why when I saw this 'Bida Next,' I'm gonna do the rules and regulations of this audition, and I will join kasi this is the longest-running show, right? Everybody can watch this.

She believes that her life is the epitome of a "broken life that's trying to make it pa rin no matter what," and that being an imperfect daughter shouldn't hinder her from doing a better job as a parent.

"If I cannot have a life as a daughter, then I should just work on being a mother."