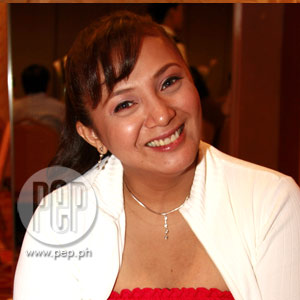 During the Manay Po 2: Overload press conference last March 13, Cherry Pie Picache detailed the qualities that she is looking for in a guy.

Cherry Pie Picache, 37, says that she is open to the idea of having a relationship with a man who is much younger than her—but he has to be mature enough for her. The veteran actress also points out that she plans to concentrate on mainstream projects instead of focusing on indie projects.

Her first mainstream project for the year is the Regal Entertainment movie Manay Po 2: Overload, which will open on April 16 instead of March 22. During the movie's press conference held at the Imperial Palace Suites at Quezon City, Cherry Pie said that she is content being the mother of her son Anton.

"Si Gary [Tria, the father of her son] hindi naman siya nawawala, e. We're very much together while rearing our child."

Some people have commented that she seems to have difficulty losing weight lately. Is it because she does not have an inspiration right now?

When asked if she is dating other guys, Cherry Pie confides that she would rather not get involved with anyone right now. "Huwag muna, sa anak ko na lang muna. Friends kami ni Gary so I'm keeping my doors open. I'm still hoping and praying."

However, she will make an exception if the guy is persistent and mature. "Pero kung may magiging masigasig, why not? Yung ligaw talaga, yung ipapakitang mahal na mahal ako, yung pakakasalan ako. I might consider [him]."

Is she open to having a May-December affair? This is a euphemism for a relationship wherein one of the two parties is considerably older than the other one.

What does she think of couples who have a significant age gap like Polo Ravales and Jean Garcia? "Panalo! Niloloko ko nga si Polo, ‘totoo ba?'"

Cherry Pie is asked if she has seen Polo and Jean together on the set of Manay Po 2. "Ayokong manggaling sa akin, pero nagkataon yung location ng shooting namin sa bahay [ng Manay Po 2] is one house away from the house of Jean.

As the interview ends, Cherry Pie proudly declares that her son Anton is turning six years old and that he will be entering Prep at the Ateneo this coming school year.