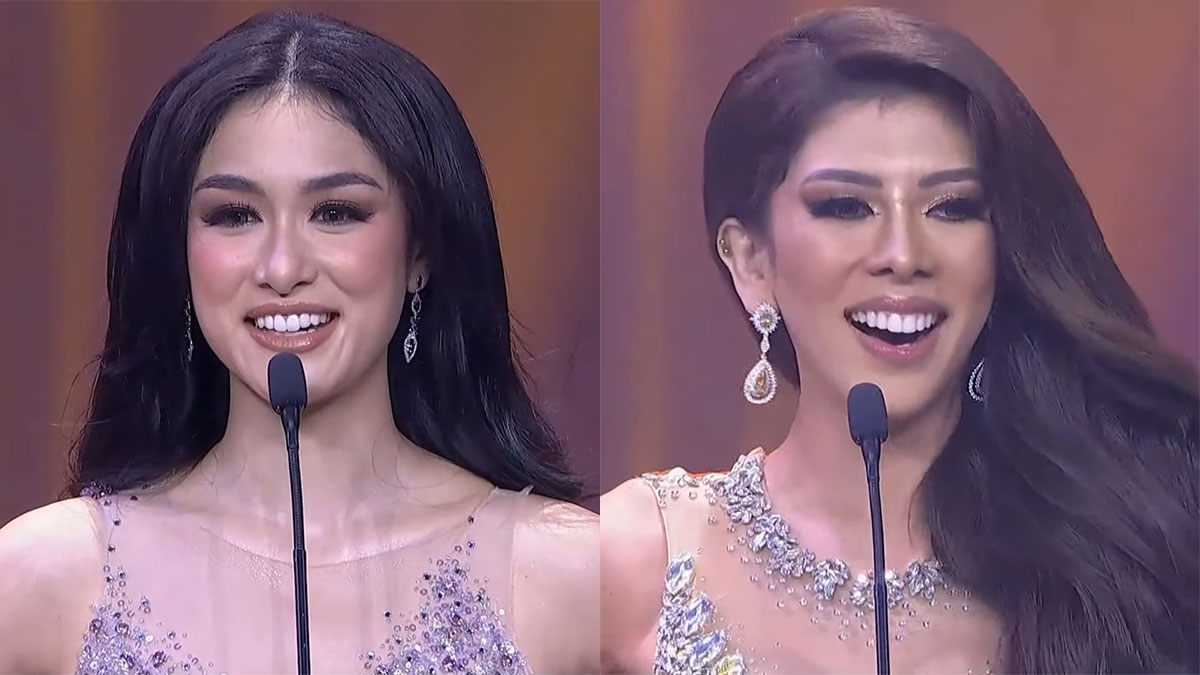 Nicole Borromeo of Cebu was crowned the new Binibining Pilipinas International 2023 in the early hours of August 1, 2022 at the grand coronation event held at the Araneta Coliseum.

Nicole and three other beauty queens were hailed as titleholders during the pageant’s coronation night.

Before the coronation, the candidates went through the much-awaited segment of every pageant: the nerve-wracking question and answer portion.

Each candidate was given 30 seconds to answer questions coming from the judges—those who were present at the venue as well as guest panelists who were shown in pre-recorded videos.

These questions tackled socially relevant topics such as current events, womanhood, fake news, and the importance of Philippine History.

Here are the winning answers of this year's batch of Binibining Pilipinas queens:

Guest panelist Donny Pangilinan: The question is on a scale of 1-10, how would you rate yourself as a responsible Filipino citizen and why?

Nicole Borromeo: As a responsible Filipino citizen, I'd like to give myself a good 8, because I always know there's room to improve. There's so much I don't know. But there's so much I'm willing to learn. And I hope to do that with you.

Judge Hon. Alfredo Pascual: Nowadays, we often hear the word ‘essentials.’ At this point in your life, what are the missing essentials and why do you say so?

Roberta Tamondong: I think one of the missing essentials nowadays, especially you came from Generation Z—ay—Generation X, is maybe old telephones. Because the reason why—I remember my dad and I going to a vintage shop and buying a vintage telephone and with that, I can really see the importance of our history and what we came from in the past. Thank you.

Guest panelist Sen. Risa Hontiveros: Pageants are a celebration of beauty and goodwill. However, there’s also a lot of toxicity online and offline that fails to empower us, women. If you win as our Binibini, how will you deal with fake news and other negative comments criticizing your looks, intelligence, and the way you live your life?

Gabrielle Basiano: Good evening, everyone. I have been receiving a lot of opinions from other people and I am not complaining about it because people are entitled of their own opinion. As for me, I will always remind women that we are strong, independent, and courageous because these are the traits that are very critical to the complicated roles that us women play into society. Thank you.

Judge Rico Hizon: A previous quiz segment in a reality competition revealed that many of our young kababayans, young Filipinos are not anymore aware and familiar with our own national heroes. For you, how important is it to look back at our history and learn more about the personalities about our past in order to build a better future?

Judge Cecilio Asuncion: A beauty pageant is a space for transformation. What has been your biggest character transformation since you joined and how could this make you deserving of a crown tonight?

Judge Joshua Garcia: Personally, how do you distinguish a historian from a Marites?

Stacey Gabriel: A historian is one who recognizes our painful past with factual evidence, looking back at our rich, vibrant history, and as well as the time that our humanity is trampled on and our heritage is almost erased. If you look at our past, we can surely move onward and upward, and rebuild... rise from this pandemic, and dream for a safer, healthier, and happier Philippines.