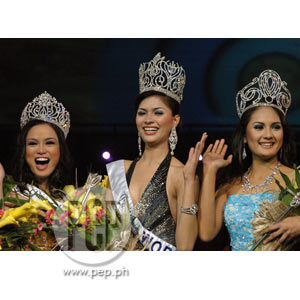 First up was Patricia Fernandez. The question was: Would you consider undergoing cosmetic surgery para ma-enhance ang iyong physical assets? Why or why not?

Patricia immediately answered, "As of now, I would try going first to the gym to enhance what I have because I really love my body and I believe that it's the initial thing you have to do...so you really have to accept yourself first."

Next in line was Jennifer Barientos. Raymond's question for her was: "Where would you draw the line when it comes to your privacy?"

"When it comes to our privacy," Jennifer began, "we only answer questions from the media that concerns the Binibining Pilipinas. Aside from this thing, hindi na kami nagbibigay ng private information unless may go-signal by Miss Araneta and BPCI [Bb. Pilipinas Charities, Inc.]."

JANINA, THE YOUTUBE PHENOMENON. Saving the best for last, Raymond called Janina San Miguel, turned famous by her Q&A blunder during the pageant and, oddly enough, made her a winner. Her question was familiar: "Anong role ng isang beauty queen in today's society?"

Polite applause followed as Janina smiled to the audience. Raymond was all praise for Janina, saying, "Janina, I admire you for the way you're handling the situation you're in right now, galingan mo sa Miss World."