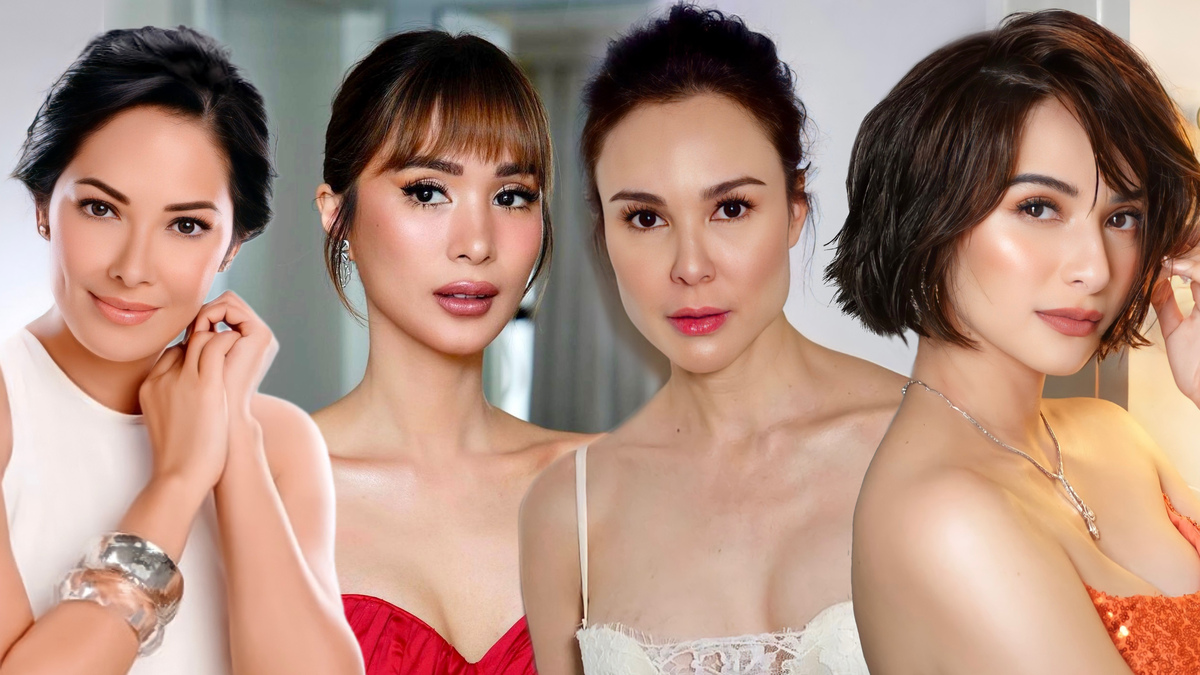 Ruffa Gutierrez, Heart Evangelista, Gretchen Barretto, and Jennylyn Mercado are among the celebrities who have opened up about reconciling with their parents.
PHOTO/S: Screengrab from Instagram

Misunderstandings with parents are inevitable; reconcialitions, too.

It's nice to know that the family issues of some celebrities that made headlines the previous years had long been settled.

Here are the stories of eight Filipino celebrities who had done that and rekindled ties with their parents.

The superstar absence at the awarding ceremony raised concerns about her health.

It was Nora's children Ian, Matet, Kiko, and Kenneth who received the plaque on her behalf, but where was Lotlot de Leon?

Sources close to the family said Lotlot was not with her siblings at the affair because she was looking after Nora who was given doctor's order to stay put.

In 2018, Nora then admitted that she was not on speaking terms with her eldest daughter.

In 2017, Lotlot refused to reveal the cause of their rift.

Fast forward to 2022, the two have already buried the hatchet.

Three PEP Troika sources confirmed that Lotlot and Nora have worked out their differences, and are now focused on taking care of the family.

Prior to their reconciliation, Lotlot broke her silence about their long-running misunderstanding.

It happened on the same day she tied the knot with Fadi El Soury on December 17, 2018.

Both Diego Loyzaga and his father Cesar Montano starred n the 2022 drama film Maid in Malacañang.

This led to speculations that father and son had since moved on from their conflict.

Diego told PEP.ph (Philippine Entertainment Portal), "I was thirteen when I met him. Thirteen years wasted, seven years since I've talked to him...

"I'm twenty-six. It means I've only been seeing him or spending time with him for six years of my life, and that's sad.

"As we get older, I just wanna spend time with the people that I love.

"If they wanna be a part of my life, my door is always open. Basta mutual."

Diego was interviewed by PEP.ph on March 8, 2022 at the Adarna Gang afterparty.

Read also: Diego Loyzaga opens up about his decision to reconcile with dad Cesar Montano

It was in 2017 when Diego published a series of angry posts on Instagram that went viral.

Her promotion of her mom's organic produce straight from their farm in Tanay, Rizal, fueled the belief that the bad blood between them was over.

Their feud made headlines on February 20, 2020, at the civil wedding of Sarah and Matteo.

Mommy Divine Geronimo was allegedly not invited, but she arrived at the venue with the Tala singer's bodyguard Jerry Tamara.

Earlier, on December 2020, Matteo shared his vision for a peaceful life with his and Sarah's families joyfully coming together.

He said, "I believe our parents raised us up and worked so hard for us that, one day, they could marry a woman and man, and two families combined, di ba.

"Having a drink together and pasta together. I think that’s our family’s dream. One day, one day it will happen."

Social media rejoiced when Heart Evangelista put an end to her conflict with her parents, particularly with her mother Cecile Ongpauco.

A week before Mother's Day on May 6, 2015, Heart wrote, "Today’s special…my mom is teaching me how to make polvoron #barriofiestababy

“Pretty happy about this. Nothing beats learning mom’s secret recipes!”

In 2013, she released a lengthy statement about her plan to file a case against him.

She said at a press conference that year on March 19, "My statement, as I said, is just the proof of what I experienced with Mr. Escudero.

"It’s not coming from anything but my actual experience of the things he’s been doing.

"He has children. When they grow up, I wish they don’t experience such a thing.

"As a mother, I’m just simply narrating things as I’ve experienced things under Mr. Escudero, that’s all. I don’t mean to cause their family pain.

It’s just that we are really suffering now because of his actions towards our family, and about trying to control our daughter who was so innocent about these things.

"I just hope that, you know, he does not experience this pain in his own children because it is really hurtful.

"We don’t wish anyone to be subjected to anything like he has subjected our family to."

Fans were gladdened that Janella Salvador seemed to have reconciled with her mom, Jenine Desiderio.

"I think naman lahat ng mother and daughter, may stage talaga na pag nag-adolescence or something.

The alleged animosity between mother and daughter started when Jenine took to Twitter in July 2017, to share her sentiments about a phase in Janella's life.

Jenine continued in another tweet, "Being protective is instinctive with any mother. But if all your good intentions and protective efforts are prevented... You're on your own."

It's been years now since Jennylyn Mercado has made progress in rebuilding her relationship with her biological parents.

In December 2018, the actress was spotted in Rome, Italy, to celebrate her biological mother Jinkee's 50th birthday.

A month later on January 15, 2019, she and her mother bonded at a restaurant before Jinkee hied back to London, England, where she's currently based.

Jennylyn's dark childhood was detailed in the June 2011 issue of YES! Magazine.

In the exclusive feature, she talked about being abused by her stepfather while her mother was working abroad.

Word quickly got out to Jinkee who denied in an episode of The Buzz, any of the allegations made by the Kapuso actress, specifically about the violence and the involved assailant.

She also declared having diligently supported Jennylyn financially since she was a child.

Jennylyn once more testified that she made no false claims during the interview, and that she could not understand why her mother would create a narrative far from the truth.

On February 7, 2018, Ruffa Gutierrez gave another update about the state of affairs between her and her mother, the talent manager Annabelle Rama.

Annabelle talked about her love-hate relationship with her unica hija in the July 24, 2018 episode of the reality series It Takes Gutz to be a Gutierrez.

She also shared how most of their fights were caused by Ruffa's choice of men in her life.

An emotional reconciliation between Inday Barretto and daughter Gretchen happened at the funeral of the late Barretto patriarch Miguel Barretto.

They hugged each other, about which Claudine Barretto posted on October 17, 2019.

Netizens reacted and pointed out that the sentimental hug seemed to have lasted for about 22 seconds.

The back story: A heated word rally occurred in 2013, when Inday referred to Gretchen as "LIAR" and "evil" and "envious towards sister Claudine Barretto." t

Incensed, Gretchen fired back, "This is what I know of Inday, my abuser: She takes great pleasure in hurting me.

"And she will take every opportunity available to feed her obsession with breaking me down, even if she makes a fool of herself on the way there.

"My mother, my abuser, who I know too well, has used this window over and over again to inflict whatever horror she could, to me, my daughter, my nieces and nephews, my siblings, or any friend and stranger who comes to our side."