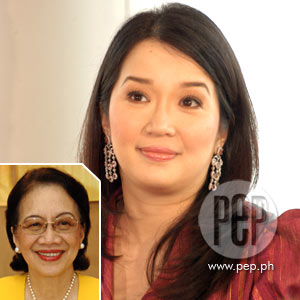 "It was just heart-breaking," was how Kris Aquino described the family's reaction when her mother, former president Cory Aquino, was diagnosed last Monday, March 24, with colon cancer. Mrs. Aquino is currently undergoing chemotherapy.

Kris Aquino feels that recently losing her pregnancy at this point in her life is a blessing in disguise.

"Maybe it's God's will, so that I can spend as much time as I can with my mom without risking my pregnancy," she bravely told entertainment columnist Ricky Lo. Kris's mother, former president Corazon "Cory" Aquino, was recently diagnosed with colon cancer and is currently undergoing chemotherapy.

In an article published today, March 27, in the Philippine Star, Ricky revealed that members of the family are all very involved in taking care of the Aquino matriarch—attending to all of her needs and accompanying her to the hospital and even to the beauty salon.

"After each session, she rests for one week before another two-week session," shared Kris. "We have to be very careful that the apparatus doesn't get wet, so I brought my mom to Bambbi's salon for shampoo."

Kris knows that the routine can be very taxing on her mother's already delicate condition. To make things easier for her mom, Kris just bought a shampoo bowl and a chair. "So she doesn't have to go to Bambbi's salon everytime she needs a shampoo," explained the popular TV host. "She can have it at home na lang."

As part of her treatment, the former president wears an apparatus strapped around her waist, which is why Cory needs to go to the salon to have a shampoo. The apparatus must be kept dry at all times.

The former president is now staying at her eldest daughter Ballsy's house in Green Meadows.

"I go to Ate Ballsy's house early mornings and stay there until late afternoon. Yesterday, I was there from 9 a.m. to 4 p.m.," Kris narrated.

LISTENING TO MOM. Cory reportedly told Kris that she was touched by the outpouring of support from countless well-wishers after Kris and brother Senator Noynoy Aquino made the announcement last Monday, March 24.

A day after making the announcement, Kris lost her seven-and-a-half week pregnancy. In a text message she sent to close friends, Kris put the unfortunate incident in a positive light by saying: "Dr Pastorfide [Kris's doctor] already ruled that I had a miscarriage. My gestational sac has collapsed and my ovum is blighted. This I'm sure is part of God's will because He wants me to be able to give my mom the best care and as much time as possible without any health concerns of my own."

Talking to Kris during their trips to the hospital, Cory would always remind Kris to plot her career and broaden her horizons like multi-awarded actress and now Batangas Governor Vilma Santos. Incidentally, Vilma was among those who extended words of encouragement to Cory immediately after Kris's public announcement.

"She was telling me to plan my career the way Ate Vi planned hers," shared Kris. "Sabi ng mom ko, I should have another career after showbiz."

Kris, however, clarified that she's not taking a sabbatical from show business despite her commitment to be with Cory during this difficult time. "I have to work. But I see to it that I am with my mom during my free time. As I said, I am spending as much time with her as I can."