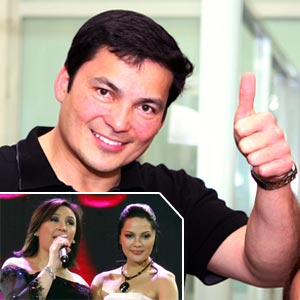 Thirteen years after he turned his back on show business, former matinee idol Gabby Concepcion is back and raring to resume his showbiz career. "Maraming nangyari. Marami akong... nasaktan ako e, so parang kinalimutan ko ang Pilipinas hindi ko na rin inisip na uuwi ako," shared Gabby about his mindset back in 1995 when he flew to the United States.

Gabby Concepcion is back home. And after 13 long years of living a relatively normal life in the United States, the former matinee idol is undoubtedly still a hot copy.

Arriving last March 30, at 3:27 in the morning, Gabby amiably granted his first interview in Philippine soil to ABS-CBN.

"It's nice to be back after thirteen years," said the former actor. "Well, masarap talaga dahil masarap umuwi sa pamilya," he added, describing the euphoric feeling of returning to his roots after living in a foreign country for more than a decade.

ESCAPING THE SPOTLIGHT. Hours after his arrival, Gabby made his first official television appearance on The Buzz where he was interviewed by host Boy Abunda.

Hurt and disillusioned with the state of his career in 1995, Gabby revealed that turning his back on show business was a decision he resolutely made back then after a thorough self-examination.

Like anyone who escaped the country to start a new life in a foreign territory, Gabby had to work extremely hard to earn a living and survive in his new environment.

The still goodlooking actor was not broke when he arrived in the U.S., but he knew that his savings would not be enough to sustain him especially since he already made a decision to stay indefinitely.

To equip himself, Gabby enrolled himself at Lincoln University to strengthen his chances in landing a good job. For the former actor, it was a necessary step.

Living in America was a trying time for Gabby and he admitted feeling lonely at times. As they say, living independently, especially abroad, is a good way to develop a person's character.

The biggest catalyst that paved the way for his return was his father's health condition and not because of a movie project.

Months before his homecoming, rumors started circulating that Gabby will do a movie together with young actress-TV host Jolina Magdangal for GMA Films. After weeks of anxious anticipation for a formal announcement, Gabby backed out from the project. According to reports, Gabby was not happy with the significance and exposure of his character in the film.

He did admit that the problem was on his end. For a good actor who had been away for so long, Gabby's reason or demand somehow makes sense.

Fortunately, all is still not lost and Gabby gave his word to the producers that he's bent on doing the project perhaps provided that adjustments on the script are made. "Oh, definitely I already told the executive that I am honoring," clarified Gabby.

SHARON, KC, AND MOVIES. Speaking of movies, Boy asked Gabby if he has a particular leading lady in mind. The answer it turned was a no-brainer: ex-wife Sharon Cuneta is sitting on top of Gabby's list.

He shares Sharon's concern, however, about the impending media circus such event would generate.

But on the contrary, Gabby knows it is part and parcel of the entire trade. Just for the sake of giving the people what they truly wanted, he is wiling to take the blows.

As for his personal relationship with former love team then ex-wife Sharon, Gabby said that everything's well between them although they never had the chance to talk face to face. Most of their past conversations have been solely on the phone.

Now that he's here in Manila, Gabby is not disregarding the possibility of meeting up with the Megastar formally. But he's not vouching for it either.

"For us to sit down, hindi na siguro mangyayari ‘yon dahil nag-usap na kami. There's no need. Marami na kaming napag-usapan. But if we want to talk further, we can do that pero siguro there's no more need for it."

Years after the bitter separation, Gabby is hoping that everything's water under the bridge now—and that includes whatever animosity the falling out spawned in its wake.

"Well, siguro sa mga naririnig natin noon, may galit siya sa ‘kin," he acknowledged, "but that's all in the past."

MENDING FENCES WITH MANAY LOLIT. When Gabby left for the U.S. in 1995, his relationship with longtime manager Lolit Solis was in shambles. The formidable talent-manager tandem was caught in the middle of the 1994 Manila Film Festival alleged fraud during the awarding ceremonies.

The reunion and eventual reconciliation took place in Las Vegas during a Manny Pacquiao bout.

For his comeback, Gabby simply enthused with great affirmation: "I'm open to anything."