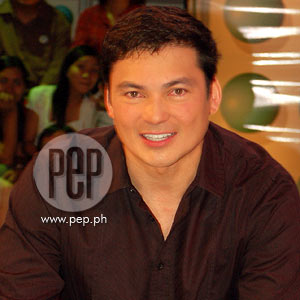 Part of Gabby Concepcion's return to Manila after living in the U.S. for 13 years is to hopefully settle all of his standing obligations that were left hanging in his absence.

A day after arriving onboard a Boeing 744 airplane of the Philippine Airlines Flight PR 105 from San Francisco, California, Gabby was reportedly spotted at the Metropolitan Trial Court (MTC) in Manila earlier today, March 31.

Lawyer Eduardo "Ed" Flaminiano and movie producer Rose Flaminiano accompanied the former matinee idol as he appeared before the sala of Judge Marlo Malagar of the MTC Branch 5 at around 11:30 a.m. Mrs. Flaminiano is also the actor's new talent manager.

According to GMANews.TV, a source who requested anonymity revealed that Gabby posted a bail of P6,000 for a previous case involving falsification of public documents.

Some, however, are speculating that the case might be connected to Gabby's past marriages. After separating from actress-wife, Sharon Cuneta, Gabby hooked up with Grace Ibuna and Jenny Syquia with whom he has daughters. He also married a certain Jenny Martin and one Genevieve Yatco.

When probed further on the details of the case, the source reportedly declined to identify the complainant and provide other information. The source, however, clarified that the legal issue being faced by Gabby has nothing to do with the controversial 1994 Manila Film Festival hoax.

Date of arraignment, according to the source, has been set on April 30. As standard practice, Gabby was asked by the court to appear on the mentioned date while the complainant will most likely be issued a subpoena.

A few days before Gabby's arrival, Atty. Flaminiano reportedly asked the court to allow him to post the bail in behalf of his client. The court squashed Flaminiano's motion and required Gabby presence before the court.