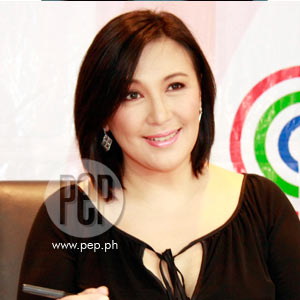 PEP editor-in-chief Jo-Ann Maglipon sent a text message to Sharon this morning, April 16, thru her manager Sandra Chavez as well as directly to Sharon herself, on the off-chance that the text would get to the Megastar. Happily, by 3:01 p.m. Manila time, Sharon replied.

Here's Sharon's text message to Jo-Ann that should be interesting to all Sharonians and movie buffs:

"Since we started filming April 5, have had only 1 day off—and we've been shooting from morning, till more often than not, past midnight, sometimes way past it. Haven't had a decent 6-8 hrs sleep since. Have been averaging 2-3. Pag naka-4 talon na! Pero rarely.

"Felt the flu coming on and once I recognized symptoms, I immediately made contra with zithro and had to pair with medrol pa cos paos na! Seems to have worked. But puyat and STRESS soooo bad.

"Shooting a highlight this morning at the airport—ayayayayayay!!! Touching ba? Aakyat na naman ang stress level ko! Say a prayer for me will you?"

That was it. And now prayers and best wishes from PEP, of course, go to Sharon in this promising story about an OFW (Overseas Filipino Worker) that will be the Megastar's first film on the big screen after four years.