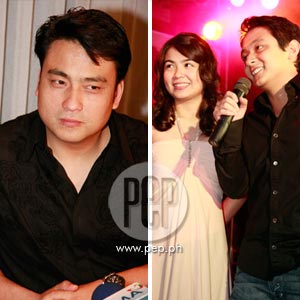 "Well, I wanted to give the Revillas the opportunities to have this [pamamanhikan] because I think, I don't know whether they had this and this is something traditional ng mga Pilipino, di ba? So, I actually asked all my family to go to Bong's house in Alabang and we had dinner together. I even provided the food because that is the tradition, that the guy, the man will have to bring everything.

"So, Bong and I, Lani and I and everybody, had a good talk yesterday [May 13]. I was able to express my feelings to Bong, whatever it is and everything, and it came very good. In other words, nawala na lahat ng sama ng loob namin. Nagkaroon kami ng samaan ng loob because basically no one wanted to talk to me and I had to leave for the States."

"Basically, I understand what Bong is feeling," sabi ng ama ni Vince. "Anak ni Bong babae, anak ko lalaki, and he was doing that way. But then, ang feeling ko naman was that, sana naman, he gave meaning to our friendship that he would talk to me, explain to me, or we would talk and sit down like what we did yesterday. It's the only thing I wanted to do. Explain to him that I had nothing to do with this, and that people are even saying na kunsintidor ako and all of that. And this is not true.

"Exactly," sagot niya. "I have really nothing to do with it."

"Alam mo, that's true, ‘no?" pagsang-ayon naman ni Mr. del Rosario. "Pero while doing that and keeping quiet, a lot of people around Bong, family, and everybody are talking bad about me. They're saying that, you know, I never helped Bong, I never did anything for Bong and everything. I do not want to take any credit whatsoever. Give the credit to their family. Their family raised funds for them, but also I raised funds for Bong. In other words, Bong cannot deny it."

"Totoo rin ‘yan," pagkumpirma ng ama ni Vince. "Basically, because of the heartache that I was feeling, you know, I had to go into Makati Med, got a check-up and all of this, and after this I went to the States. I had to get an appointment with my doctor."

"Yes, and I was just hearing it in the States and I couldn't do anything about it. I kept quiet about and I would like to thank Cristy [Fermin]... I don't know where she got the information to all of these things, but she came out in a newspaper, in a tabloid, you know, at least, defending who I am."

"That is right. I mean, my brothers and I had refused to have any interview and I'm telling you this is the only interview that I will do in my life. After this, I will not come out anymore. I just wanted to clear the air, ‘no?"

"I just wanted people to know I am not an employee of Bong Revilla and my wife is never and has never been after my money or anything. My [second] wife [Trisha Braun] is very well off. If she does not have the same amount of money that I have, probably she has more. So, I don't expect people to say anything bad about her."

"Well, he told me that he came out and said that he was a good friend of mine, and he was helping him and all of that. And if there‘s any more question about this, I think the best person to talk to is Bong, di ba? Because I never and will never and have never accepted any money from the Revillas."

"Well, I am in a good terms with Bong and Lani and all the Revilla," sagot ni Mr. del Rosario. "I just don't like the way people have been criticizing me and my family, di ba? We are very private. We never came out. I've been asked to talk in Inah's wedding, I refused. I said no. And today, I am here talking to you because you were here and a guest of the restaurant, and that's it."

"Probably I will not be here. I will go in the States and live there for six months. Then I'll come back here for a short period of time."

"Yes, for my son's sake and for Inah's day, I will attend the wedding. I will be there to support my son."

So, hindi siya magbibigay ng anumang mensahe during the wedding?

"Wala, I am not going to give any message whatsoever," mariin niyang sabi.

"No, that I heard only that the other channel has bought the rights and everything."

Does he like the idea na i-televise ang kasal ng anak niya?

Anong partikular sa kasal ang alam na nila, but they are against it?

"No, I gave that opportunity to my son na siya na ang bahala. I will support him 200 percent on what he wants to do."

Saan titira sina Inah at Vince after the wedding?

"Binigyan ko sila ng condo sa Three Salcedo sa Makati and they are going to stay there right after the wedding."

What about the honeymoon?

"I think the honeymoon had been done!" sabay tawa ng ama ni Vince.

"Ang participation ng Del Rosario family sa gastusan is whatever my son asked me I gave it to him."

"I would not have a plea in having a very, very kawawang wedding, di ba? So to whatever it is, I think it's a very good figure that both Bong and me will be happy with."

"My son loves Inah and loves the child that he is going to have. That's all I can say."

"Inah I've always accepted to be a close friend, even Jolo and even Byan. The whole family comes to me when they have problems and my heart is always open that I helped them out.

"I would like to see Inah and Vince have a new life and go on with life, and Vince and Inah will not have anymore problem because my father has also provided for my sons than maybe more than we have gotten. So Inah will have no problem with whatsoever."