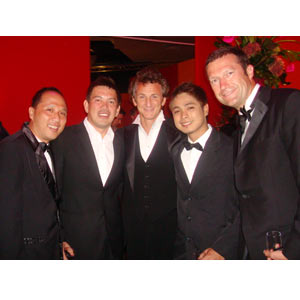 Even though Brillante Mendoza's film Serbis did not win any awards during the 61st Cannes International Film Festival, it was able to impress the jury head for this year, Hollywood actor-director Sean Penn.

Ferdinand Lapuz of Ignatius Films told PEP (Philippine Entertainment Portal) via email about the experiences of the Philippine delegation while they were in France to represent Serbis. This Filipino film shows a day in the life of a family that operates and lives in a run-down adult moviehouse in Angeles City, Pampanga. It competed for the Palme d'Or Award, but the highest plum of the festival went to the French film The Class (Entre les Murs).

Brillante "Dante" Mendoza stayed in France with Coco Martin and Gina Pareño from May 16 to May 27. The second batch of actors—namely Jaclyn Jose, Mercedes Cabral, Julio Diaz, and Kristoffer King—were there from May 16 to 22. They toured Nice, France; Ventimiglia, Italy; and Monaco.

Last May 25, Sunday, the cast of Serbis was picked up by two festival cars at around 5:45 p.m. to take them to the Grand Lumiere Theater where the awarding ceremony was to take place. From Martinez Hotel, Ms. Gina and her daughter Raquel, Coco Martin, and Direk Dante walked The Steps, with the men wearing tuxedos. Cinematographer Odyssey Flores and his wife Sunshine, former actress Evelyn Vargas, French producer Didier Costet, and Ferdy also attended the gala ceremony.

The nine-member jury, headed by Sean Penn, along with Natalie Portman and director Alfonso Cuaron, announced the list of winners this year. After the gala ceremony, guests were treated to a closing-night dinner and cocktail in the Palais Salon des Ambassadeurs.

SEAN SUPPORTS SERBIS. Christian Jeune, scout for the Cannes Official Selection, told Ferdy that Sean Penn "loves the film [Serbis] very much." When Ferdy caught up with the Hollywood actor, Sean told him that he "wanted to show Serbis in the U.S. and help in anyway he can."

Ferdy then introduced Coco as one of the actors of the film. Sean took Coco's hand and asked him jokingly, "How is your ass?" It seems that he remembered Coco's character in the movie because of the festering boil that was shown on Coco's butt.

When Sean was introduced to Direk Dante, he could hardly contain his excitement about the film Serbis. He said that he really fought for the film but mentioned that he has nine members and it just can't be his decision alone. He even told the Filipino director to contact his publicist and press agent Mara of ID Communications if he needed help in the United States. Sean offered to help the producers get a U.S. distributor in the future. Sean is best known for his films I Am Sam (2001) and Mystic River (2003).

Direk Dante shot Serbis in a span of 12 days and spent a month in post-production. He sent a roughly edited copy to the selection committee late last month. Serbis was chosen out of a thousand films from almost a hundred countries to compete with 21 other films from 13 countries.