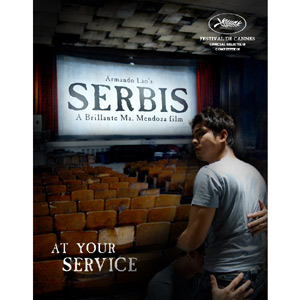 The controversial poster of Serbis, which got an "X" rating from the Movie and Television Review and Classification Board.


The poster and trailer of the movie Serbis have been rated X—or banned from public exhibition—by the Movie and Television Review and Classification Board (MTRCB).

Yesterday, June 10, Brillante "Dante" Mendoza informed PEP (Philippine Entertainment Portal) regarding this development and said that the MTRCB will review the film today, June 11, to determine whether it will receive an R-18 or not. The producers plan to have it reviewed by the Cinema Evaluation Board (CEB) next week to determine if it will be eligible to receive amusement tax exemptions.

The poster of Serbis shows actor Coco Martin standing in an empty cinema house while someone is kneeling in front of him with his face seen above the groin area of Coco. When asked if they will change the poster, Direk Dante says that they plan to darken the lower portion of the poster to hide the kneeling person.

In the Philippine version of Serbis, what scenes do they plan to remove?

Last May 18, Serbis had its world premiere screening at the Grand Lumiere Theater in Cannes, France.

Serbis is expected to open in selected Metro Manila theaters on June 18.