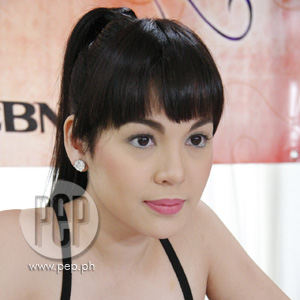 "Mahirap i-explain sa kanya [Sabina], but we want her to know that we love her so much. Mas kailangan niya kami. God's will yung pagdating niya sa buhay namin," says Claudine Barretto about adopted daughter Sabina, who is now legally part of their family.

The world of show business can be either a pedestal of glory or a tough arena of battle for most, if not all, the celebrities. Some of the longest-staying stars in the entertainment industry admit that enjoying simple blessings help them stay where they are.

Claudine Barretto climbed hard on her way to stardom even before she got married to Raymart Santiago, her fellow artist in the showbiz industry. Different issues and controversies tried to pull her down, but she remained strong until she began her own family.

During her solo press conference for Iisa Pa Lamang at the Roberto Antonio's Flower Shop in Quezon City earlier Friday, June 27, Claudine confessed what she and Raymart set their sights on their family.

"We want to be able to use the power that God has given us to touch the people's lives in a way that it will help them and help us also. Maraming lessons ang gusto ko ituro," said Claudine.

She and Raymart have two children, their three-year-old adopted daughter Sabina Natasha and their 11-month-old son Rodrigo Santino.

Claudine hopes that someday people will understand why they adopted her.

"Mahirap i-explain sa kanya [Sabina], but we want her to know that we love her so much. Mas kailangan niya kami. God's will yung pagdating niya sa buhay namin," she admitted.

She also revealed that they tried to track down Sabina's biological parents, in vain.

Claudine wants the best for her children. As a mom, she wants to pass on every lesson that she has learned through her life, not only in show business, but also in the real world.

"Yung makihalubilo sa pinakamalaki hanggang sa pinakamaliit na tao, hindi tinitingnan yung estado ng tao. We want them to know that you can use the power that God has given to touch people's lives and help people in so many ways," she says.