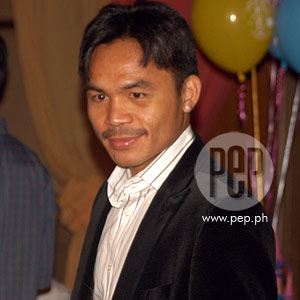 Manny "Pacman" Pacquiao is now the proud possessor of the WBC lightweight crown by knocking down Mexican-American David Diaz in the ninth round.

MANDALAY BAY, LAS VEGAS — Manny "Pacman" Pacquiao has made boxing history again by knocking out Mexican-American foe "Dangerous" David Diaz in the 9th round of their match earlier today, June 29, making the Pacman the first Filipino ever to win in four boxing divisions. He now holds the WBC lightweight championship crown, aside from his super bantamweight, junior lightweight, and super featherweight championships.

Manny definitely proved to everyone that he's the best pound-for-pound boxer in the world.

THE FIGHT. What started out as a dream for Pacman is now a reality because of his hard work and determination in beating Diaz. Gaining five pounds for this fight didn't slow down Pacman at all. He moved like lightning around the ring, giving Diaz a series of combinations that made Diaz comment, "Those punches are just too fast."

Manny was relentless in going after the Mexican early in the first round. And it seemed like Manny's gloves were made of magnets and Diaz's face was made of iron, because no matter how hard Diaz defended himself, Manny's punches always made it through.

The next three rounds definitely belonged to Pacquiao as his speed never faltered in giving Diaz more combinations of jabs and hooks. Quite noticeable was how Pacquiao now effectively used his right hand in dishing out punishment on Diaz's face and body. By Round 5 was evident that the beating had taken its toll on Diaz as he involuntarily danced like a drunk.

Round 6 opened with Manny no longer showing as much aggression as in the earlier rounds, but Manny's double hook gave Diaz a nasty cut in the eye. Referee Vic Drakulich called for time to have the cut checked out. It wasn't serious, and the fight continued.

Manny could definitely smell weakness in his opponent and he took advantage by coming in surprisingly fast, giving Diaz combinations of left punches to the body then a right to the face. All that Diaz gave out in this round were just jabs and weak straights.

LUCKY NINE. The beginning of the 8th round fired up Manny as he gave Diaz precise right-left-right punches that sent Diaz sagging and dazed. Manny's five-punch combinations nearly sent Diaz to paradise but the clock saved him.

Diaz was probably wondering how much more punishment he had to go through when the bell signaled the start of the 9th round. Face bloodied, he tried to go for offense, but Manny was already after him, giving Diaz a three-punch combination to the head.

Diaz looked like he couldn't take any more combinations from Pacman as his left eye began to blacken and close up quickly because of Pacman's solid left. Like a lion circling a wounded zebra, Pacman dished out final jabs, then quickly, a right-left punch that finally sent the ex-champion down face first.

The referee did not even bother to count as he waved the fight off at 2:24 in the 9th. It's over. The Pacman wins by KO!