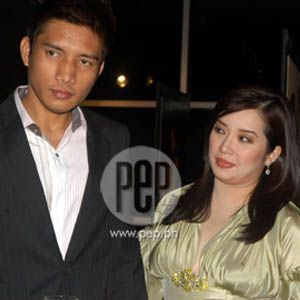 James Yap and Kris Aquino will leave the country on August 2 to have a much needed vacation. The controversial couple is hoping that their time together away from home would bind them even closer.

Just recently, the controversial couple revealed to The Buzz how they celebrated their third wedding anniversary last July 10 at the gazebo of the EDSA Shangri-La Hotel in Mandaluyong City.

Unfortunately, the strong rains prompted the couple to cut short the romantic dinner. The violinist and guitar player hired by James were supposed to render 15 songs but the weather just wouldn't allow the celebration to continue.

U.S. VACATION. James and Kris courageously confessed that they're currently undergoing marriage counseling to help them fully understand their role as husband and wife.

Although saddened by his team's elimination in the ongoing PBA Fiesta Conference, James in a recent conversation with sports columnist and expert Quinito Henson, mentioned that he's also relieved since the entire Purefoods Giants team is feeling "banged up" after a long and rugged season.

Again, James defended himself for getting involved in an altercation between teammate Jondan Salvador and Talk ‘N Text import Terrence Leather. The sweet-shooting swingman candidly confessed that he was, in a way, hoping for Leather to be ejected, that's why he reacted to the temperamental import's conduct.

"We still had a chance to win," James confided to Henson, who wrote their conversation in his column. "I knew if he reacted to me, he would go crazy and get himself ejected. I just thought he didn't deserve to continue playing the way he was acting."

Being out of contention enables James to catch up on his role and responsibilities as a husband and father. He excitedly shared to Quinito their overseas itinerary. James and Kris will leave Manila on August 2 for a 16-day U.S. vacation.

The couple will watch Little Mermaid, Legally Blonde, and Wicked on Broadway while in New York. They also secured tickets to watch Love and La Reve in Las Vegas, Nevada.

While they are away, James's mom will come to Manila from Escalante to take care of Joshua and Baby James. Kris and James will return home in time for the 25th death anniversary of Kris's father, former Senator Benigno "Ninoy" Aquino on August 21.