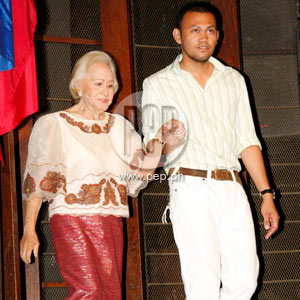 Direk Adolf Alix Jr. assisted Ms. Anita Linda during the premiere of her tribute film, Adela, last July 11 at the Cultural Center of the Philippines. This film has been chosen one of 13 Asian films to be exhibited in the 33rd Toronto International Film Festival.


The tribute film for Anita Linda has been chosen one of the 13 Asian titles included in the 33rd Toronto International Film Festival. As early as July this year, Adolf Alix Jr. already knew that his film Adela would be part of the film fest held annually in Toronto, Canada.

The prolific Filipino director was cited for crafting "a deeply compassionate portrait of the plight of the elderly in the Philippines, anchored by a bravura lead performance by veteran actress Anita Linda."

Adela is one of seven films that will take part in the Contemporary World Cinema section of the TIFF ‘08. The prestigious film fest will take place from September 4 to September 13. Familiar Hollywood faces grace the streets of Toronto, Canada for the ten-day festival that has featured several Hollywood blockbusters in the past, including Brokeback Mountain (2005), Walk the Line (2005), and Hotel Rwanda (2004).

Direk Adolf informed PEP (Philippine Entertainment Portal) that Ms. Anita Linda is very pleased with the honor of being included in an international film fest. The 84-year old actress is keen on attending the Toronto IFF, especially since she received an invitation from the organizers of the event.

He plans to be in the Toronto IFF for about five days, together with Adela's executive producer Noel Ferrer and line producer Arleen Cuevas.