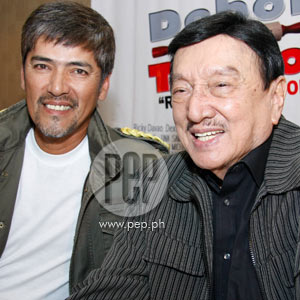 Comedy King Dolphy and Box-office King Vic Sotto sat down for an interview with Startalk last August 9 to talk about their upcoming film Dobol Trobol,—which will open tomorrow, August 13—their sentiments on Joey de Leon's controversial issues, and the special people who inspire them.

There's talk going around that people are already clamoring for a sequel to Dobol Trobol even though the film has yet to hit theaters. What is their reaction to this?

Since this the first time the two great comedians team up for a movie, what exactly did they discover about one another?

In the art of making people laugh, did Vic and Dolphy exchange lessons?

PATCHING THINGS UP FOR FRIENDS' SAKE. Even outside of work, Vic and Dolphy seem to cross paths, with Joey de Leon and Willie Revillame, as bridge. Recently, Dolphy asked Willie on when the latter was going to make up with Joey.People may remember that Joey and Willie had verbal tussle on TV concerning a Wowowee incident.

THE WOMEN. Dolphy's autobiography entitled Hindi Ko Ito Narating Mag-isa showed content from writer Bibeth Orteza saying that Dolphy, when it comes to women, has already gone through A to Z. However, Vic Sotto was close at his heels.

In Dolphy's case, before he reached Z for Zsa Zsa, there was an A for Alma Moreno. A controversial issue went out about Alma refusing to be interviewed for Dolphy's book, a thing that Dolphy respects.

So what is Dolphy's message to Alma?

Turning to Vic, Butch asked, "Ikaw Bossing, may letra ba nakalista sa..." But before he could finish, he was met with numerous "Ay, wala, wala," from the comedian.

"X, marami," joked Vic, referring to the former relationships he had before. Vic also said that he had stopped at P and he intended it to stay that way. P, by the way, stands for current girlfriend Pia Guanio.

When it comes to relationships, Vic is normally quiet and secretive, but in this situation, he was sure about girlfriend Pia Guanio. "Siya na ang huling babae sa buhay ko," Vic said. Then he jokingly added, "ang sunod sa kanya, e, baka lalaki na!"

There is some news popping out that Vic and Dolphy were planning to do a double wedding with their respective partners. Is this true?

Dolphy and Vic may be comedians but their camaraderie for one another is taken very seriously. For Vic, it was very much a blessed opportunity for him to star in a film with Dolphy, as he expressed in his final message.

"Pag mahal ko ang isang tao, sinasabi ko ‘I love you,'" Dolphy, in turn, said. Then facing Vic he said in all seriousness, "I love you. Mahal kita."