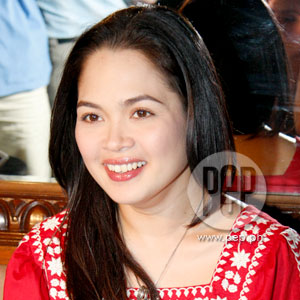 Right after dubbing scenes for her upcoming movie Kulam, Judy Ann Santos went straight to A Taste of L.A. Café at Roces Avenue, Quezon City for an intimate interview about the indie movie that she starred in and co-produced. Juday and Ploning director Dante Nico Garcia attended the interview yesterday, September 1, to talk about their period film shot in Cuyo, Palawan.

Ploning is officially the Philippine entry to the 2009 Oscar Awards' best foreign language film category. Panoramanila Pictures Co.'s movie beat Caregiver, Tribu, and Endo for the honor of representing the country in the Oscars derby.

Last year, the indie film Donsol was chosen as the Philippine entry, but it failed to make the cut. The last Filipino film that was able to enter the Top 18 entries of the Oscars was the Gil Portes movie Munting Tinig (international title: Small Voices) way back in 2002.

The list of foreign films that will enter the Oscars will be officially released on January 2009.

This is the first time that Judy Ann has tried being a producer. How was the experience?

PLONING BEATS CAREGIVER. PEP (Philippine Entertainment Portal) asked Juday's reaction to the news that her film beat Sharon Cuneta's Caregiver for the honor of being the country's representative in the 81st edition of the Academy Awards.

Direk Dante explained that the next step for them is to raise awareness about the film. There are around 1,000 members of the Academy of Motion Picture Arts and Sciences and they must be able to convince at least 300 members to vote for Ploning, so that the film could be included in the Top 18 films.

ADOPTED CUYONONS. For the movie Ploning, Judy Ann and the rest of the cast members spent three weeks on the island of Cuyo last February. From August 25 to 30, Judy Ann and Beth Tamayo-Wong returned to Direk Dante's hometown to grace the screening of Ploning and to help improve the town's hospital. Little did they know that they would become adopted daughters of Cuyo.

Juday and Beth received plaques of honor from the grateful town. Juday is very grateful about being adopted as well.


Ploning will be screened at Mogwai in Cubao on September 5, 10, 18 and 27, 2008. International screenings of Ploning are scheduled on September 18 to 20 at San Antonio, Texas; September 29-30 at Los Angeles, California; and October 3-4 at San Francisco, California.

Judy Ann will soon be seen in ABS-CBN's upcoming teleserye Humiling Ako sa Langit. It is expected to air in October and will also star Derek Ramsey, Will Devaughn, and Rafael Rosell.