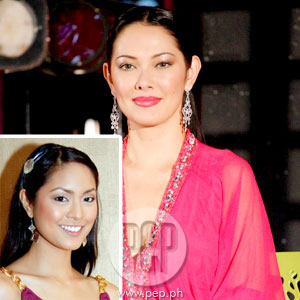 Despite the incident and brief confrontation, Ruffa Gutierrez stressed that she has nothing against beauty queen turned actress Riza Santos. "Riza, I'm not angry at you, I'm sure you have your reasons. ‘Yon lang, at that moment lang, I was just like waiting for you to say something or say 'hi' naman to us or to the director but you didn't," said Ruffa in an interview with The Buzz.

Beauty queen turned actress Riza Santos reportedly earned the ire of Ruffa Gutierrez after she kept the entire cast and crew of ABS-CBN's new series I Love Betty La Fea waiting for hours on one of its recent tapings.

Aside from turning up way beyond her set call time, the Filipino-Canadian stunner did not even bother to offer an explanation for her tardiness or at least greet the people present at the set, Ruffa recalled.

RUNNING IN LATE. Based on what she heard and knew at the time, Ruffa said that Riza's call time was seven o' clock in the evening but she showed up at around 11 p.m.

For a supposed quick take, Riza's absence consequently forced Ruffa and the staff to stay and linger around the set until near midnight.

Encountering a late co-star is not a rarity in the world of show business and Ruffa stressed that she was initially willing to put Riza's blunder behind to avoid stalling the shoot further. What irked the actress-TV host, however, was her co-star's apparent lack of courtesy the moment she arrived.

A source from Viva—the firm managing Riza's career—defended the former Pinoy Big Brother housemate by saying that their talent was not aware of her taping schedule that day, thus making the entire incident a case of miscommunication between the production team and Riza's group.

Ruffa argued that Riza could have at least issued an apology, particularly to the director, for all the hassle she had caused.

"At that point lang, Tito Boy, whether she was stuck in traffic or whether she had a big problem, you know, ang sa amin lang sana she could have said sorry man lang to the director because all of us were just waiting for her."

The daughter of former matinee idol Eddie Gutierrez and feisty manager Annabelle Rama still managed to keep her composure and was able to complete all the required takes in the span of an hour. After the shoot and before leaving the set, Ruffa—who by then was just waiting for Riza to give her side—finally decided to lecture the newbie on the ethics of professionalism.

Turning her attention to Riza, Ruffa said, "'You know, Riza, next time don't make anyone wait,' sabi kong ganun. ‘If you wanna make it in this business, be professional,' and I just left but still she didn't say anything after that."