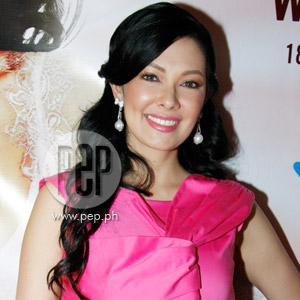 "There will always be rumors and I will not react to every sighting written about me. My career is my focus and my children are my priority," declares Ruffa Gutierrez.

Every now and then, articles in newspapers, magazines, and even websites, suggest that Ruffa Gutierrez has something going on with this or that guy rumored to be either her suitor or her boyfriend. Some of these reports are released just for the sake of boasting a "scoop," never mind that it may adversely affect the people concerned.

Ruffa Gutierrez will surely continue to get her share of suitor and boyfriend rumors. She's still young, beautiful, and highly visible on the showbiz landscape. But the lady is also busy with her two kids and showbiz commitments, not to mention her philanthropic activities. Add the fact that she and the dad of her two daughters have yet to settle their issues.

PEP (Philippine Entertainment Portal) sought out Ruffa to get the real deal once and for all.

In an exclusive chat via call and text, the former beauty queen stressed: "My heart, mind, and soul is where it should be for now...only to myself."

And so, any article about her love life, according to Ruffa, will be purely speculative.

With several endorsements, a showbiz talk show, a TV series, and most importantly, her kids—the actress-host prefers to steer clear of any controversy or complication as much as possible. She's got her hands full already.

Her relationship with the dad of her adorable kids, Yilmaz Bektas, is also much better now. Ruffa says they have "good communication lines" and they are in the process of "privately trying to settle many things."

She continues, "But the good news is, he has sent some of our belongings from Turkey, and we're in a better place now."

"SUITOR" RUMOR. Ruffa has been separated from Yilmaz for almost one year and three months now and, to date, there's no news in any legitimate forum claiming that she is already attached.

Last June 23, Jun Lalin, the publicist of the Gutierrezes, put out a story about Ruffa's "suitor." The seven-foot cager went to the birthday party of the former beauty queen and gave her a bouquet of flowers. Her mom Annabelle Rama even dubbed the guy "King Kong" in one of her interviews.

"BOYFRIEND" RUMOR. But prior to the "cager-suitor," PEP had gotten feeds from various sources claiming that the host-actress has a "boyfriend based in Hong Kong."

The item, however, was classified as "hearsay" and we shelved it due to lack of tangible proof.

Recently, the rumor infiltrated the Web. Ruffa's immediate reaction was to laugh it off. "It's a funny rumor!" she exclaimed.

"There will always be rumors and I will not react to every sighting written about me. My career is my focus and my children are my priority.

"Until I fix everything concerning their welfare and the past hasn't been ironed out, there is nothing serious that people should be excited or alarmed about."

She didn't deny the fact that she currently has "a lot of suitors, local and foreign." But with her hectic schedule, lots of things she has to attend to each day, and her concerns with Yilmaz, the lady has no time for love.

And if anything gives her a high, it's about her kids and her career. Her present stint with I Love Betty La Fea is getting rave reviews. "Nakakatuwa na marami ang naloloka sa role ko sa Betty La Fea. Effective daw," she enthuses.

Everything in her life now is "better," says Ruffa Gutierrez.