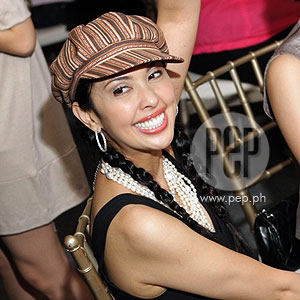 Pops Fernandez said the breakup rumor with boyfriend Jomari Yllana is "super-last season." But Pops admitted she doesn't mind being linked to Gabby Concepcion. "Every girl would go for him. He looks great. He actually even looks better now."

Pops Fernandez speaks up in The Buzz about controversial issues surrounding her.

Rumor has it that she and boyfriend Jomari Yllana nearly split because of Gabby Concepcion. Some rumors suggest that she was also helping Gabby in his recent concert in Music Museum.

"Super-last season na ‘yan," Pops said. "Yung latest, I'm just working hard. So, it's not true of course. Totoo na I did guest in Gabby's shows. ‘Tapos, siguro in the process siyempre we saw each other and...humihingi siya ng advice when it comes to his songs, tapos ano ang gagawin niya as a singer."

Did Gabby ever court her in the past?

"No, never," said Pops. Then she quipped, "Pero it's never too late at ngayon nali-link kami ngayon, why not? Ha-ha-ha!"

If Pops were single, would she go for Gabby?

"I'm not lying. Every girl would go for him," admitted Pops. "He looks great. He actually even looks better now. Obviously I can't... for many other reasons."

MARTIN NIEVERA. Martin Nievera and Katrina Ojeda's split filled the news before. So, what does Pops think about this?

"That's ten seasons ago," laughed Pops. "Actually I don't really discuss anything about them and I'm not about to. I think Martin and I have matured. So, kumbaga sa personal ko na buhay, is now my personal buhay. And his personal life is his... and I think it's safer for both our health to keep it that way. Okay naman na ang relationship namin ni Martin. Nag-uusap kami at nagkakaintindihan. Mas okay na ganoon na lang."

How about a future concert with Martin?

"Sana," said Pops. "We are discussing it and it will hopefully happen next year."

With all her coming concerts, does Pops still have time for Jomari?

"We make time. That's the most important thing," smiled Pops.